The Other Side of Benny Golson 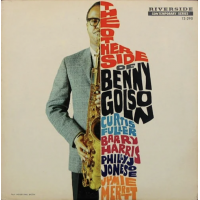 slideshow
Yesterday was Benny Golson's birthday. He turned 92, and he remains one of jazz's greatest tenor saxophonists and composers. Following his graduation from Howard University, Benny played with saxophonist-singer “Bull Moose" Jackson's R&B band. In the 1950s, he also played extensively with Tadd Dameron and Art Blakey and the Jazz Messengers before forming the Jazztet with Art Farmer in 1959. Along the way, Benny composed dozens of songs that became jazz standards, including I Remember Clifford, Stablemates and Along Came Betty. In the early 1960s, Benny relocated to Hollywood to compose and arrange for TV cop shows, sitcoms and the movies. In the mid-1970s, Benny returned to New York where he resumed playing and recording, winding up in the movies, in The Terminal with Tom Hanks in 2004. He's also one of the kindest cats in the business.

Benny has gorgeous taste. The sound of his horn is beautiful and his original compositions and melody lines are seductive. A great place to start listening to Benny is The Other Side of Benny Golson. Recorded in November 1958 for Riverside, the album features Curtis Fuller (tb), Benny Golson (ts), Barry Harris (p), Jymie Merritt (b) and Philly Joe Jones (d). The tracks include Benny's Strut Time, Are You Real? and Cry a Blue Tear, plus Junior Mance's Jubilation, Curtis Fuller's Symptoms and Richard Evans's This Night.

This is a perfect album, like many of Benny's recordings. The music on The Other Side of Benny Golson is relentlessly pretty, with stunning solos throughout. For example, dig Benny's solo on Symptoms. He blows a long, seamless and slippery line that takes your breath away. The same is true on Are You Real? Fuller, Benny's frequent album and Jazztet colleague, also stretches out with powdery solos. Dig him on This Night. Barry Harris is at his peak here, jumping in with dart-like lines (catch him on Cry a Blue Tear) combined with Merritt's straight-ahead bass and Jones's pots-and-pans attack on drums.

Yesterday, I listened to this album a dozen times in a row. Each time, I was thunderstruck by something new. A remarkable recording and one of Benny's best. His tone is so rich, smokey and elegant. A giant.