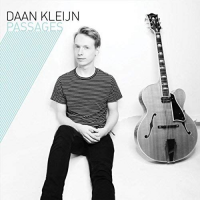 slideshow
For at least the next couple of days we’ll attempt to deal with some of the backlog of albums that accumulated during the week or so when the Rifftides staff was on vacation.

Kleijn’s spare format of his guitar with bass and drums allows him freedom to pursue an instinct for melodic creativity. Despite its title, his composition “Bird Song” has no obvious Charlie Parker allusion. Rather, it develops subtle rhythmic movement, and relaxed interaction with fellow Hollanders Tobias Nujboer, bass, and Joost van Schalk, drums. Kleijn also wrote the sprightly and surprising “Humble Bee.” The remaining pieces on the album are compositions by Richard Rodgers, Lee Konitz, Duke Pearson, Bobby Hutcherson and Antonio Carlos Jobim. Jobim’s “Estrada Branca” is a captivating rendition of the piece known in English as “This Happy Madness.”

Kleijn has established himself in the jazz communities of both New York and the Netherlands. Based on his inventive and imaginative work here, it seems safe to predict that he will occupy an increasingly solid position among jazz guitarists. For further evidence, here is a link to video of the Kleijn trio’s bracing performance of a Cole Porter standard.

Lloyd’s melding of disparate kinds of music has never been on more convincing or effective display. The 80-year-old saxophonist sourced the album from country, pop, rock, his bottomless fount of jazz imagination and the leathery soulfulness of Lucinda Williams’ vocals. His quintet, The Marvels, includes guitarists Bill Frisell and Greg Leisz, bassist Reuben Rogers and drummer Eric Harland. Frisell’s solos and the atmospherics created by Leisz’s pedal steel guitar are crucial elements in what makes this collection fascinating. Although Ms. Williams will inevitably attract the most listener and media attention—singers always do—but she is one voice in an ensemble. Lloyd’s tenor saxophone is primary. The churn, energy and humanity in his playing lingers in the mind. If you have forgotten what a formidable flutist he is, his work with Frisell on “Blues For Langston And LaRue” will remind you. In a relaxed duet with Frisell, his fuidity on tenor saxophone is riveting in “Monk’s Mood.”

Ms. Williams revisits two of her earlier songs, “Ventura” and “Dust” (the latter loosely based on a work by her late father, the poet Miller Williams). She also performs a new one, “We’ve Come Too Far To Turn Around,” which Lloyd introduces with a subtle tenor sax soliloquy. Harland accompanies her on that piece with a series of quiet drum commentaries. This isn’t Lucinda Williams’ album. It is a triumph for Charles Lloyd, but it may also become one of her most successful recordings.