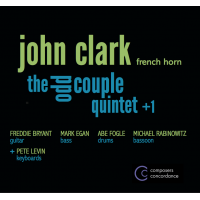 “Virtually every French horn student starts playing the Mozart Concerti at a young age. I think I was 11 or 12 when I first attempted them, and even then I wanted to improvise on them. I had no idea what 'jazz' or 'creative music' was, but I had the desire to change a note here and there, to add some notes and leave some out. Thanks to Composers Concordance, this childhood dream has become a reality. In 2011, ComCon produced a concert for which members of the group arranged Mozart pieces, in new settings, for a small chamber ensemble. I was struck by how well the slow movement from Concerto #4 worked in a jazz ballad setting. Soon after this concert, I started to imagine how the other movements would sound with different jazz arrangements"

Thanks, Gene, Dan, Milica and everyone at Composers Concordance.

PRODUCTION NOTES: The Odd Couple Quintet +1 was originally recorded April 6, 2014 at SPIN recording studio in New York City. The engineer was Nik Chinboukas and the producer was John Clark. It was mixed by John Clark, Pete Levin and Franz Hackl. It was mastered by Franz Hackl, Hacklmusic, NYC.

DownBeat Magazine wrote about Clark’s “...command of a forbidding instrument that speaks a solo language rarely heard in jazz...”

“Awesome! It gave me great pleasure to hear the great John Clark! Virtuosic Horn playing! Fantastic arrangements! Great fun! It made me smile from ear to ear!” —Julie Landsman, Principal Horn of the Metropolitan Opera Orchestra