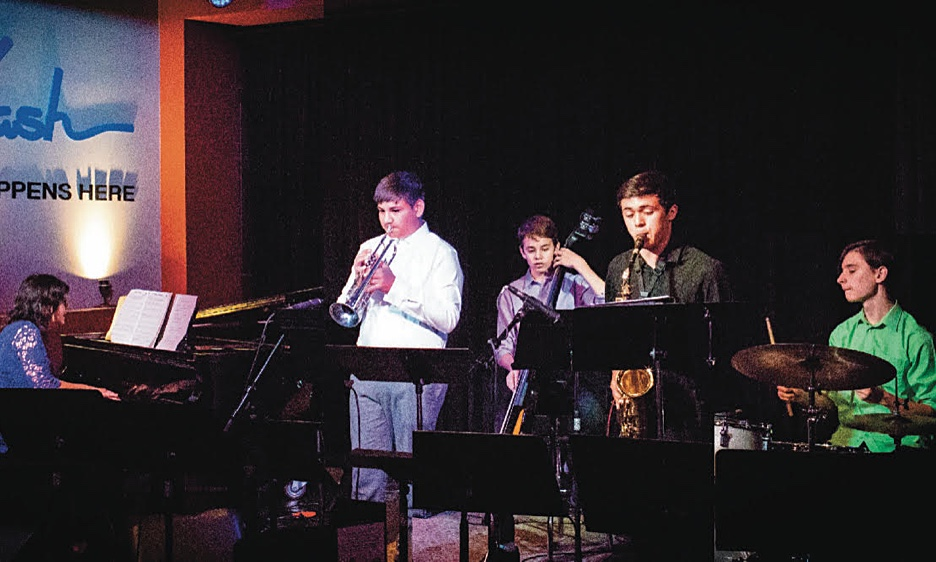 SOURCE: ALL ABOUT JAZZ PUBLICITY
September 16, 2020
Sign in to view read count

In honor of her long-standing love and support of young jazz artists, The Nash announces the establishment of The Mary Bishop Perret Jazz Education Fund.

Donations made to the fund will directly support The Nash programs for youth, including Phoenix Jazz Girls, The Nash Legacy Ensemble and The Nash Futures, providing scholarships for young musicians who want to learn and play jazz.

Contributions can be made by cash, check or online.

A “Yeah” for Mary Bishop's Legacy

Everyone knew when Mary Bishop was in the House.

Her love of jazz wasn't just complete, it was loud, as she'd yell out an approval “yeah” for a great riff. When someone once tried to shush her, she shot back, “I'm not in church, I'm in a jazz club.”

It was her favorite place to be. From 1979-1982, she managed the Century Sky Room on Washington Street—the launching pad for young men and women who'd go on to jazz greatness, like Lewis Nash, Allan Chase, Margo Reed and Francine Reed.

Then she solidified her place in Phoenix' jazz history by producing a seven-part concert series called the “Roots of Jazz,” that is beloved to this day,

So when Mary died in July, a day short of her 81st birthday, her jazz friends in Phoenix sought an appropriate way to honor her memory and her legacy.

That has resulted in the Mary Bishop Perret Jazz Education Fund at the Nash.

“I think this is a most appropriate way to honor this special lady,” said Joel Robin Goldenthal, executive director of the Nash. “This is a restricted fund dedicated to supporting three of our exciting education programs: our new Phoenix Jazz Girls Rising, the Future Workshop, and the Nash Legacy Ensemble.”

“Mom would be thrilled about this scholarship,” says her daughter, Molly Allen. “It so perfectly represents her love and passion for jazz music, and her strong support for music education.”

Mary Stivers Bishop had many careers over her lifetime After graduating from Point Loma High School in San Diego, where she'd grown up, she attended the University of Arizona, where she took up rodeo and trick riding. That led to movie roles as a stunt woman, doubling for Shirley MacLaine and Sophia Loren. She appeared in television episodes of Bonanza, Laramie and Thriller.

She left that career to study education at Arizona State University, and then for years taught high school—English, History and Black Studies— both in Phoenix and San Diego.

But her great love was the iconic jazz club on the second story of 1140 E. Washington Street, the Century Sky Room. It was a major fixture in Phoenix' jazz scene from 1961 to 1982. It was known throughout the nation, and visiting musicians often ended up there after their concerts, including members of the Duke Ellington and Count Basie bands.

But it was the young, hungry musicians who Mary most loved. And they've never forgotten her. Renowned drummer Lewis Nash, the namesake of Phoenix' reigning jazz club, remembers he was an ASU student when he first met Mary in the late 1970s. “Mary saw and heard something in a curious young kid drummer... Mary immediately embraced me and encouraged me to continue in my quest, and she began to hire me to work at the Century Room Room and to play in many of the various special projects she produced.”

Allan Chase, jazz saxophonist, composer and department head at the Berklee College of Music in Boston, remembers, “Mary gave me many great opportunities to play and hear music.”

The Sky Room was the original venue for Mary's Roots of Jazz series that she produced with arrangements by Prince Shell, Phoenix' acclaimed jazz pianist. The series included The Blues, Big Bands, Bird 'N Bebop, Rock n' Roll, The Latin Influence. 'Trane and Miles and Bessie to Aretha.

She repeated the series at the Boojum Tree in the Doubletree Inn in Central Phoenix. She had sellouts at both locations.

Mary left Phoenix in 1982 to join the love of her life, Denis Perret. They lived in France for several years, then settled in San Diego near her daughter and three grandchildren. All of them took to music, and Mary never missed one of their concerts.

But she often “came home” to the Phoenix jazz scene, including a reunion for Friends of the Century Sky Room, the 2015 Memorial for Margo Reed and several anniversaries of The Nash—she rejoiced in the success of the young drummer she'd encouraged decades earlier and maintained a lifelong friendship with Lewis Nash.

In honor of her lifetime passion for jazz, The Mary Bishop Perret Jazz Education Fund will help these specific programs at The Nash:

Phoenix Jazz Girls Rising is an innovative new entry level jazz program designed to teach female musicians, ages 10-17, basic skills in jazz, while building their self-esteem and confidence in performing in what has traditionally been a male-dominated art form. The program concludes with a concert for family and friends.

The Nash Futures Workshop offers young musicians, ages 10-17, a pathway so they can begin to speak the language of jazz. It also gives them a chance to be part of a jazz band.

The Nash Legacy Ensembles brings talented high school jazz musicians from across the Valley to explore jazz styles, composition and arranging techniques, along with the art of improvisation, gaining invaluable small-group performance experience and expert coaching.

The Nash anticipates an annual concert by young musicians as a fundraiser for the Fund.

“Those of us who loved Mary know how pleased and proud she'd be that her memory is devoted to youth education,” says Jana Bommersbach, a member of the planning committee. “She remains in the House. We can almost hear her yelling, 'Yeah'.”

Contributions can be made by cash, check or online (see link below).

The Nash, owned and operated by Jazz in Arizona Inc., a 501(c)(3) organization, is an education and performance venue named in honor of world-renowned drummer and Phoenix native, Lewis Nash. Since its opening in 2012, The Nash has grown to present more than 300 events annually including jazz performances, jam sessions and educational programs – featuring students, top local and regional musicians, national and internationally acclaimed jazz artists and jazz royalty. For 7 years running, DownBeat has included The Nash in its prestigious “List of Great Jazz Venues” in the world.

Internationally acclaimed jazz drummer Lewis Nash, named the most valuable player in jazz by Modern Drummer Magazine, was described by Ira Gitler of The Biographical Encyclopedia of Jazz as “Perhaps the most talented drummer of his generation." Lewis grew up in south Phoenix and by the early age of 10 years old began playing drums. At age 21 he moved to New York City, where he became the drummer of choice for an incredible array of artists- from jazz masters to the hottest young players of today. His 30-year career includes performance on 10 Grammy award-winning albums and an impressive discography of over 400 recordings with jazz legends such as Betty Carter, Tommy Flanagan, Dizzy Gillespie, Oscar Peterson, McCoy Tyner, Hank Jones, Joe Henderson, Sonny Rollins, Ron Carter and Clark Terry, as well as such contemporary jazz artists as Branford Marsalis, Wynton Marsalis, Diana Krall, Joe Lovano and Roy Hargrove.

A highly respected educator and clinician, Lewis is on the faculty of the ASU School of Music as a Professor of Practice in Jazz.