"The Music Is The Magic," New CD By Vocalist Lainie Cooke, To Be Released March 17 By Ralph Peterson's Onyx Music Label 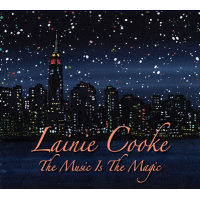 slideshow
Given the deep jazz feeling and serious vocal chops displayed by Lainie Cooke on her new CD The Music Is the Magic, it’s hard to believe that the disc is only Cooke’s third. But this masterpiece of vocal jazz, which will be released March 17 by Ralph Peterson’s Onyx Music Label, affirms her standing in the front ranks of jazz singers performing today.

“The wisdom, clarity, and nuances possessed by Lainie throughout the recording are most refreshing,” comments Peterson in his notes to the CD. “At 73 years young, she has remained relevant as a songstress in the purest sense. I am proud to have produced what I believe is her best work to date.”

Peterson, who plays drums and trumpet on the CD and served as its producer and arranger, surrounded Cooke with a superb cast including pianist/arranger Tedd Firth, her accompanist of the last dozen years; soprano and tenor saxophonist Myron Walden; and bassist Luques Curtis. (Tabari Lake substitutes for Curtis on “Mañana.”)

Cooke first met Peterson, long one of the most in-demand drummers in jazz, in 1990, but they didn’t begin making music together until relatively recently. “Ralph has the ability to lift you to a place musically and rhythmically that you didn’t know you knew how to do,” she says. “He’s always demonstrating something that makes you want to do better.” Cooke is the first singer Peterson has produced for his Onyx Music Label.

“Lainie can cook on the kind of standards she prefers—the Porter-Gershwin-Rodgers & Hart classics that challenge her dramatic bent for story-telling,” Harvey Siders wrote in a Los Angeles Daily News review of one of her Southern California engagements. “She has an unerring ear for melodic invention and an instinctive feel for time that allows her to take unusual rhythmic liberties. And her intonation is ‘right on.’”

The tunes on The Music Is the Magic spoke to the singer: “If the music is beautiful, wonderful, soars, and has feeling, I'm attracted to it,” she says simply. “How I Wish” (aka “Ask Me Now”) and “I Have the Feeling I’ve Been Here Before” (“one of the most beautiful songs in the world,” according to Cooke) were inspired by Carmen McRae, a favorite vocalist of hers. The title tune and “Live for Life” both stem from Abbey Lincoln recordings.

Also included are Dave Frishberg’s “Our Love Rolls On,” Harold Arlen’s “Out of This World,” and a rollicking calypso treatment of Peggy Lee’s “Mañana,” long a staple of her in-person repertoire. “By the end of it, the whole audience is singing,” she says. “It becomes a joyful experience.”

Lainie Cooke broke into show business at age 6 by entering a Minneapolis radio talent contest for young people and won with her rendition of the then-popular tune “Cruising Down the River.” At 11, she began appearing two or three times a week as a hostess on a local television game show. Then, at age 12, she won a talent contest and was awarded a trip to New York City. She felt instantly at home.

Cooke has been a resident of the city since she was 20, save for relatively brief periods in Jamaica and California. “I went to New York to find out what I could actually do with all of the stuff that was inside me,” she reflects. “I wasn’t sure what I wanted to be—a musical theater performer or a nightclub singer.”

After working an office job for a period, she got fingerprinted for a cabaret card and played a few New York clubs, but upon doing her first out-of-town gig in Hartford, Connecticut, she developed an instant distaste for being on the road. Voice-over work, which allowed her to stay home in New York City, became her calling and kept her steadily employed for most of the next 40 years.

Cooke moved to Los Angeles in 1979 and began singing in clubs with such top jazz men as pianist Dick Shreve and bassist Bob Maize but moved back to New York in 1983 and resumed doing voice-overs. She returned briefly to L.A. to record half of her first CD, Here’s to Life! (2002, Harlemwood), with Shreve, Maize, and others. New York musicians, including Firth, bassist Cameron Brown, and drummer Matt Wilson, completed the album. Her second CD, It’s Always You (2008, Harlemwood), also featured Firth, Brown, and Wilson, as well as saxophonist Joel Frahm.

For her CD release shows, Cooke has scheduled engagements in New York and Los Angeles: 3/31 at the E Spot Lounge Upstairs at Vitello’s in Studio City, with pianist Karen Hammack and her trio; and 4/10 at the Zinc Bar in Greenwich Village, with the same musicians as the CD.

“Words alone cannot do justice to the way I feel about making music with Tedd, Luques, Myron, and Ralph, or how proud I am of this project,” says Cooke. “The dictionary defines magic as producing mysterious or extraordinary results. I hope The Music Is the Magic will inspire the same kind of feelings in listeners.”