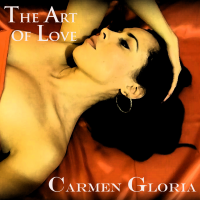 slideshow
In times where the world needs more compassion and love to go around, Carmen Gloria has just delivered us a warm selection of songs titled The Art Of Love to remind us of just what love and fear are made of. With her fusion of modern Sade and Gloria Estefan, she blends Latin jazz, jazz, neo-soul and ballads in an “elegant and charming” way. This is her first jazz fusion release besides the cover of “So Nice (Summer Samba)” a few years ago.

The Art Of Love has already received two fantastic reviews by Jazz Reloaded and The Smooth Jazz Ride music blogs, insinuating the song “A Tear That Never Falls,” co-written by talented singer on “America’s Got Talent” (Season 8) Deanna Dellacioppa, is a reminder of a James Bond theme song. For the title song, “the hooks will remind you of Sade, but Gloria’s vocal strength shines through when telling her own story towards the end of the track,” said Vidal at Jazz Reloaded. The EP “delivered with gentle elegance and charm, is the stuff that deep dreams embrace as you sleep,” said Ronald at The Smooth Jazz Ride.

As an actress, Carmen has most recently had a recurring role as Captain Vasquez on the Robert Rodriguez/Mark Burnett hit Emmy-Nominated TV series “Lucha Underground” on El Rey Network, Netflix, iTunes, etc., and recurring on a Norwegian TV Series “Det Kunne Vært Verre” playing the role of Sofia. She writes, directs, produces, edits and stars in some of her own short films and has over 60 acting credits, including a Best Supporting Actress Award for the play “Soldiers Don’t Cry” by the Valley Theatre League in North Hollywood, California, written by award-winning playwright Layon Gray.

As a visual artist and painter, Carmen has exhibited her work in California mostly and sold her paintings internationally.

To add to her list of accomplishments, Carmen also served in the U.S. Army active duty for 6 years, becoming a sergeant at the age of 21. She also earned a Bachelors Degree in Government & International Politics with a minor in Legal Studies from George Mason University. She only had about 3 months left to graduate when she decided to move to Hollywood to pursue acting. It is in Hollywood she became the polymath she is, experimenting with art, growing and learning as she goes.

Carmen is currently working on a several projects—We just don’t know which medium of art will she be using and we’re looking forward to seeing what is coming next.