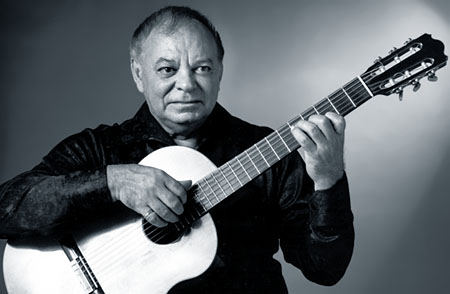 slideshow
In 1963, Brazilian guitarist Laurindo Almeida joined the Modern Jazz Quartet for a performance at the Monterey Jazz Festival, sparking a brief, but bountiful relationship. The results would include a European concert tour the following year (1964) and the brilliant Atlantic Records date Collaboration, now being reissued for the first time on CD by Label M.

During this period in The Modern Jazz Quartets history, the group consisting of John Lewis on piano, Milt Jackson on vibes, Percy Heath on bass and Connie Kay on drums, were at a collective highpoint. Continually developing the vision of its musical director Lewis, The MJQ were finding both critical and commercial success on the strength of live performances that took jazz from the clubs to the concert halls, as well as a string of splendidly conceived albums and ground-breaking jazz compositions.

At the same time on the West Coast, Laurindo Almeida was riding the bossa nova craze to the top of the charts with a number of best selling sides for Capitol Records that reinterpreted standards and pop songs in the Brazilian-based musical style. Nearly a decade prior, Almeida became arguably the first Brazilian artist to record bossa nova with a jazz combo through his collaboration with saxophonist Bud Shank.

As Laurindo Almeida described the tour leading up to the recording of Collaboration: The reaction seemed to indicate that the audiences were pretty well divided between classical and jazz fans. We were able to play whatever we liked. And of course by the time we came home we knew one another well enough to give the best possible performance of all this material. Indeed, the group was razor sharp and reveling in the opportunity to cover a wide range of styles and material. Collaborations program reflects Almeidas comments, evenly divided between pianist John Lewis compositions and those by composers ranging from Johann Sebastian Bach (Fugue In A Minor) to Antonio Carlos Jobim (One Note Samba).

Collaboration ebbs and flows seamlessly, at times finding The MJQ as playful as theyve ever been on record. The gorgeous Spanish and Brazilian melodies provided by Almeida, gently evolve in the context of The MJQs lilting rhythms and natural blues swing, culminating with the closing number Concierto de Aranjuez; a composition by the Spanish contemporary composer Joaquin Rodrigo. Each member contributing subtle flourishes that in sum provide for extreme moments of beauty and grace. I am very proud of this performance, explained Almeida. It was one of the best things I ever did.