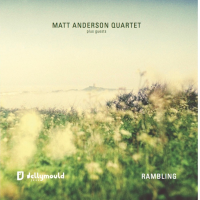 Innovative saxophonist and composer Matt Anderson and his quartet release their brand new album Rambling in May 2018 on pioneering UK label Jellymould Jazz, ahead of an extensive national tour.

Rambling fuses together a range of distinct musical influences, exploring the common ground between contemporary jazz and folk music, reminiscent of Anderson’s rural upbringing in the North Yorkshire moors. Subtle strains of blues and country can also be detected within the music, as well as echoes of Scandinavian jazz and Afro-Celtic soundscapes.

Matt Anderson is the winner of the 2017 Dankworth Prize for Jazz Composition and a sought after saxophonist, already well established in the UK and European jazz scenes. His 2015 debut album Wild Flower (also released on Jellymould), features trumpeter and BBC New Generation Artist Laura Jurd, as well as guitarist and leader of critically-acclaimed group Flying Machines, Alex Munk, amongst others. The album received widespread praise from critics and audiences alike, cementing Anderson’s reputation as an ingenious player performing exciting and original compositions.

Rambling features Pete Lee on piano, Will Harris on double-bass and Jay Davis on drums, as well as some tracks with special guests Nick Malcolm on trumpet, Owen Dawson on trombone and Aubin Vanns on guitar. All with solid academic backgrounds and a wealth of valuable experience under their belts, the quartet and their collaborators have combined their collective talent to create a vibrant and daring album, projecting the technical skill that one would expect from musicians of such high calibre, overlaid with the distinctive compositional flair for which Anderson himself is becoming increasingly known.

In recent years Matt Anderson has been the go-to saxophonist for musicians such as Jamie Taylor (also appearing as a featured soloist on Taylor’s latest album), Jiannis Pavlidis and Mark Donlon, performing regularly across the UK, with recent appearances in New Zealand, Scandinavia and Eastern Europe. Honing and developing his skills as an integral part of these groups, Matt now returns to his synonymous quartet, bringing his own specific and individual creativity to the forefront of the international jazz scene.

Rambling is Anderson’s finest work to date and signifies an evolution and development of a signature sound. This new music is a genuine representation of positive progression, both in terms of maturity of composition and effervescent performance.