SOURCE: ALL ABOUT JAZZ PUBLICITY
December 4, 2018
Sign in to view read count 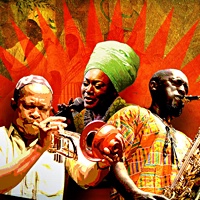 slideshow
Uncharted Crossings- The Backstory of the Windrush Generation

Uncharted Crossings may well be Grand Union Orchestra’s most powerful and politically committed show in its thirty-year history. The music traces the contribution to British culture of the people who came to these shores from the Caribbean from the late forties onwards. In many ways, theirs was just a chapter in a story that had begun five centuries earlier on the slave ships that crossed the Atlantic carrying human cargo to the plantations of North and South America and the Caribbean.

But when the Empire Windrush docked at the port of Tilbury on the banks of the River Thames, it brought with its some 800 souls who, this time, crossed the ocean in hope where their forebears had journeyed in fear. Uncharted Crossings is, in part, inspired and prompted by Hackney Museum’s current exhibition commemorating Black British Music in the borough and like that exhibition it celebrates both the achievements and the struggles of those pioneers and of those who came after.

Amongst those 800 or so individuals were some who had served the Allied cause in the fight against the Axis powers. Others were travelling to the “mother country” for the first time and pioneers they were indeed for the many thousands of Caribbean migrants who would transform the streets of London, Birmingham, Bristol and elsewhere with their music, their culinary arts and religious traditions.

Their forebears had been stolen and uprooted from West Africa. As they crossed those seas to Brazil, the Caribbean and Southern states of America, perhaps the best they could hope for was to survive. But they did something much more than just survive. Somehow, they kept alive their memories of the music, culture and religious traditions of home. More remarkably still, they did so by taking whatever they could use from the dominant culture of their slaveowners, adapting to their own purposes. Their efforts would eventually produce the richest of musical harvests and change the way we hear and understand music forever in the twentieth century.

There was no great welcome awaiting the Windrush generation in the United Kingdom. Nor would there be for the many who arrived over the next two decades. There was no acknowledgement of their sufferings under slavery or colonialism, no acknowledgement of their achievements. And seventy years later here, as in the USA, their struggle for full civil and economic rights continues.

Yet, their achievements are enormous and are celebrated in Uncharted Crossings. And what a celebration! Any Grand Union Orchestra show is a feast for the ears, eyes, the body and the mind. Like those who created Afro-Cuban son and danzon, the blues, jazz, reggae and calypso, the music of Grand Union moves us physically and emotionally – and it

makes us think. For, at its heart lies a love of the creative potential of all human beings, an empathy that could reshape our world and our relationships.

The Grand Union Orchestra has always been a United Nations of Jazz and the twenty musicians and singers who bring Uncharted Crossings to the stage at Shoreditch Town Hall next Sunday embody in themselves the story they will tell. Both saxophonist Tony Kofi and Hugh Maskela’s favourite percussionist Francis Fuster hail from West Africa from where this tale began, while trumpeter Kevin Robinson was born in the Caribbean. And to complete the journey, Andy Grappy on tuba and Harry Brown on trombone were born in the UK of Caribbean descent and singer percussionist Jonathan André is British-born of African descent.

Appropriately, Uncharted Crossings begins with an invocation of the Yoruba orisha Eleggua, guardian of cross-roads and boundaries, who looks after and blesses travellers. The journey that follows takes the listener through the Yoruba chants and drum rhythms of West Africa to their continuing role in the religious practices of Brazil and Cuba. It swims then in the warm Caribbean waters of calypso and reggae and on to the shores of Louisiana and the banks of the Mississippi, as it travels through worksongs and spirituals to the emergence of the blues and jazz in the delta.

As Tony Haynes, leader and composer for the orchestra says, “Exploring what lies behind the Windrush story with such great musicians is set to be our most powerful show yet, honouring the remarkable legacy and profound influence of Black music and its history.”