SOURCE: ALL ABOUT JAZZ PUBLICITY
September 30, 2008
Sign in to view read count 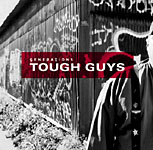 San Francisco, CA -- Tough Guys is the swinging and expressive first CD by the Generations Ensemble, a multi-generational, all-star band featuring Jimmy Cobb, Ray Drummond, Ronnie Mathews, Marcus Belgrave, Eric Alexander and Andrew Speight. You’d expect a band with such a lineup to be a mainstream locomotive. On Tough Guys, those expectations are fulfilled.

After all, Jimmy Cobb’s career goes all the way back to his days with the great Earl Bostic and runs through a six-year tenure with Miles Davis, including performing on the seminal Davis recording, Kind of Blue. Mathews, Drummond and Belgrave boast bios and discographies as glittering as Cobb’s. Alexander is one of the hottest young stars on the New York scene. And Speight is well known, by his peers if not the public at large, as one of the most powerful bop-influenced alto saxophonists of our day.

“Tough Guys don't have to repeat themselves. The musicianship is superb, the CD is wonderful, and the band knows how to convey the message. And I got that message—right from the top.” – Sonny Buxton, producer, KCSM radio

Jazz stars brought together for a mission of mentorship

The group was brought together by the International Center for the Arts (ICA) at San Francisco State University to serve as ambassadors for and educators within the ICA’s Generations mentorship program for up and coming young jazz combos. Each year, beginning with 2008’s rousing success, Generations sponsors an International Competition and Fellowship for Emerging Jazz Combos. A deserving young band is chosen to come to San Francisco several times within a year-long fellowship to receive intensive, hands-on mentoring from the jazz stars of the Generations Ensemble.

The program is designed to help re-emphasize the historical importance of the jazz combo as a critical feature of jazz education and musical innovation. Speight, both faculty member of the San Francisco State University Music Department and the Generation Program’s Artistic Director, described assembling the Generations Band in the Tough Guys liner notes.

“When it came to assembling the personnel for the Generations Band,” Speight wrote, “we wanted great musicians wholly grounded in jazz tradition with something important to offer as teachers. Jimmy Cobb goes back to the great Miles Davis bands of the 60s, and I had worked with him in Nat Adderley’s quintet, so he was first. Jimmy suggested Ray Drummond and Ronnie Mathews, extraordinary musicians who played together for years in Johnny Griffin’s great band. So now we had a powerful engine. Next we built a front line that could generate electricity and really swing hard. Marcus Belgrave is an inventive trumpeter with a long history of mentoring people like Geri Allen and James Carter. Eric Alexander is a hard charging tenor, certainly a rising star, and I contribute a straight-ahead alto style.”

And from the moment the stars of the Generations band gathered on the SF State campus and started to play, they coalesced into a fiery, empathetic working ensemble, with gusto to spare and a free flow of musical ideas all around and Tough Guys is a happy consequences of that instantaneous synergy.

The CD opens with Thelonious Monk’s “Rhythm-A-Ning,” introduced by Cobb with a New Orleans marching band roll, as if to announce Generation Ensemble’s proud lineage straight back to the heart of jazz. But the number soon turns into a hard bop cooker providing ample testimony both to the drive of this ensemble and to the nimble interaction between musicians on display throughout the recording.

Like the rest of the jazz world, the Generations family was greatly saddened by the passing of Ronnie Mathews on June 28, 2008. In fact, Mathews’ work on Tough Guys represents his final recorded performance. Happily, the CD features two Ronnie Mathews compositions, and both attest to the spirit and vitality of this great pianist. “Jean Marie” is a post-bop enchantment featuring a shimmering opening solo from Mathews, and “Song For Leslie” is a hard-bop romp with plenty of elbow room for the reedmen.

Cobb is not hesitant about returning to the scene of former glory, and the ensemble’s extended takes on “So What” and “Freddie the Freeloader” from Kind of Blue are two of this CD’s great treasures. Cobb also contributed his loping, bluesy original, “W.K.” and the band handles the standard “Just One of Those Things” at breakneck speed, just, it sounds like, for the exhilarating fun of it.

The Generations Project blueprint calls for rotating one or two new mentors into the mix each year. And Ronnie Mathews’ passing adds both to the poignancy of the effort and the status of Tough Guys as a marvelous moment in jazz time. This is an enthusiastic all-star ensemble come together to inaugurate an exciting jazz education program and to make some great music along the way. In other words, Tough Guys who make us feel good.

Recording The Generations Band All About Jazz Publicity Michael Ricci