The Gals of Gunn 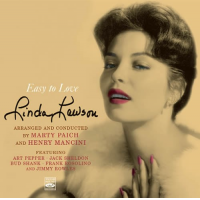 slideshow
Earlier this week, I featured a clip of Lola Albright singing How High the Moon on TV's Peter Gunn in the late 1950s. The other young actress-singer who appear on the detective series was Linda Lawson, whom I've posted about in the past about her sole superb album, Introducing Linda Lawson. She was cast on Peter Gunn as Lynn Martel, a nightclub singer under the control of a thug in “Lynn's Blues" (season 1, episode 7, November 1958). Lawson, like Albright, had a wonderful husky voice that epitomized Los Angeles during this period. It's the sound of humid melancholy and a dash of hope while driving along Sunset on a late afternoon in September.

Here are a bunch of Lawson clips: