The Function of Jazz

SOURCE: ALL ABOUT JAZZ PUBLICITY
May 8, 2008
Sign in to view read count 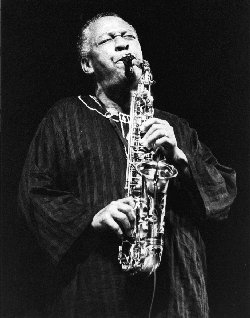 slideshow
Abstraction under siege in a utilitarian world

Some current jazz-related events have got me thinking about the necessities of life. A quintet featuring saxists Frank Morgan and Sonny Fortune at Catalina's. A benefit for the stroke rehabilitation of reedman Buddy Collette is happening at the same place on Sunday. A tribute to the late pianist Horace Tapscott is scheduled at the Jazz Bakery. There was a benefit for sax legend Teddy Edwards a couple of months ago. And windman Charles Lloyd used some of his stage time at the Bakery two weeks ago to talk about how his friend Billy Higgins, the great drummer, died in 2001 without cash for another liver transplant.

Most munitions workers have health insurance. All but a few jazz performers, though, must look to the Thousand Points of Light, because the world considers them disposable. You might think that those who improvise for their daily bread have chosen their unstable life, but in fact the life has chosen them. They've been blessed/cursed with the gift of abstraction; it will not let them go.

Forget for a second what that gift does for/to them, and consider what it does for you. Skilled improvisers are deprogrammers, constructing alternate systems, new pathways for your brain. Jazz minimizes words, which is to say it minimizes lies. Of its essence, jazz is open-ended revolution. It postulates no final destination, and it creates no product. This idea got reinforcement when I called up Sonny Fortune in New York, and he complained about an elder colleague harping on the old tune that jazz lost its way when it lost its danceability. Speaking with a slow hesitancy exactly opposite the fearsomely speedy coherence of his saxophone improvisations, Fortune described jazz as “a different language" and “on another level." The purpose of his music isn't dancing, massaging or grating cheese. “I think art is about trying to reach for a higher consciousness."

What's the state of jazz? “It's huffin' and puffin'. Some of the guys that are younger than my kids, I feel like the music they play is too old." Fortune is 63, and for him “too old" means older than bebop inventor Charlie Parker, who died in 1955 after championing a trend that was “more revolutionary, more innovative, more profound, more classical. He represented where music struggles to be art."

Fortune will get no argument from Morgan, six years older, who originally modeled his sound on Parker's long, leaping, blue-bordered lines. Fortune and Morgan also share a fascination for the knotty structures of pianist Thelonious Monk, who's a pleasant headache for most musicians, though Morgan, reached by phone in his current hometown, Albuquerque, feels like he was born with the code: “I find it pretty easy. It just seems to fit." Fortune, on the other hand, was halfway through making his second album of Thelonian tunes before “I found out that, pshew, man, I didn't know Monk at all. I mean, he really, really shocked me." The two will mine contrasting traditions of Monk sidemen at Catalina's -- Fortune on the ascending Trane rail (he's got an excellent 1999 CD called In the Spirit of John Coltrane) and Morgan sounding more like one of Monk's bop-oriented sidemen, say, Lou Donaldson. Another link between them is a common age-old relationship with George Cables, the pianist in the current quintet, which also features Steve Johns on bass and Henry Franklin on drums.

Fortune's range is one of the widest in jazz. He's dug into blues bop with Nat Adderley, Latin jaunts with Mongo Santamaria, Coltrane extensions with Elvin Jones and McCoy Tyner, and all-out vamp explorations with Miles Davis, who picked him up for a 1975 tour after he'd been in a post-swing sextet with Buddy Rich. He says a decade has passed since he met Morgan in New York; they first played together a year or so ago, and figured it was worth repeating. Morgan, for his part, calls Fortune “a great influence on me while we're out on the road, because he gets up early practicing."

Having done long stretches in prison for drug-related violations, Morgan now likes to have good influences around him. His youthful optimism almost makes you think he was literally reborn when he walked out of the slammer for the last time in 1985; he likes to see himself as a “late bloomer" who “grew up" reading the L.A. Weekly, which didn't begin publication till he was 44. He'll be glad to be back in L.A., scene of his earliest breakouts, and also happy to revisit Catalina's, which he remembers as one of the first venues to give him a break when he was mounting the late-'80s comeback that put his mug on national TV and brought him his first real money.

It was unlikely that Morgan would stay on top forever, and he didn't. His horn expression went from flaming bebop to fragile sensitivity to a memorably clueless 1994 Bakery performance in duo with old friend Tapscott. In addition to New Mexico, he's bounced from a New York base to stays in Virginia and Hawaii. Recordings have become a bit sparser, and stopped altogether after he had a stroke on an airplane in 1998, the same year his boyhood teacher Collette suffered his. He'll record more . . . before long.

Morgan was lucky enough to receive expert treatment that has pulled him back to near top form. He was motivated: “I asked the Creator, you know, 'I'll take a limp or whatever, if you let me play my horn.'" Prayer answered.

What's Morgan's repertoire these days? “Oh, I just play music. I don't pick out particular tunes. The music that you're supposed to play presents itself to you."

Oh? How does that happen? “You hear it somewhere, or you wake up whistling it." This man, like Sonny Fortune, like all jazz musicians, is tuned to a different station. He'll take what comes. He says he's just glad to be alive.