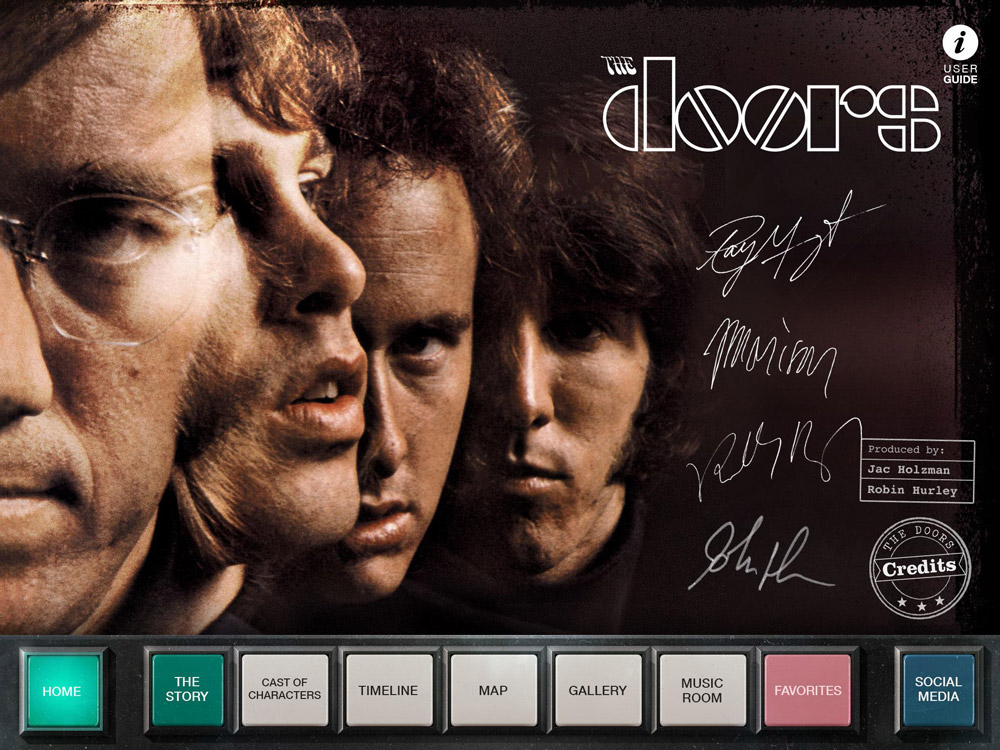 slideshow
LOS ANGELES – The Doors are once again poised to break on through with a first-of- its-kind iPad app, THE DOORS, available exclusively on the App Store. Released on May 6, 2013, by Warner Music Group’s Rhino Entertainment, the app brings the band’s story to life with an unprecedented immersive experience that delves deeply into every aspect of The Doors’ iconic career with interactive content, unpublished band images and artwork, rare videos, music, and much more.

THE DOORS APP was conceived and produced by Elektra Records founder and Warner Music legend Jac Holzman, who signed the Doors to the label in 1966, and Robin Hurley; along with the participation of drummer John Densmore, guitarist Robby Krieger and keyboardist Ray Manzarek, and the estate of the late singer Jim Morrison. Holzman, a pioneer in the music industry and a pivotal force throughout the band’s career, comes full circle with this app. Holzman and Warner Music now bring The Doors into the digital age with a visionary project that redefines how a band’s work can be chronicled in the virtual realm.

“The genesis of this project began with a desire to digitize the boxed set, to use new technology to improve upon a much-loved fan experience. It made total sense to choose The Doors. They have always been ‘ahead of the curve’ artists and their story is one of the great sagas in rock,” says Holzman. “Together with the band, we tell a compelling tale using materials from The Doors’ own archives and the Warner Music vault plus the hundreds of other sources we chased down – a wealth of treasures including previously unseen photos, fresh interviews, and behind the scenes insights and reflections. Delivered in a single download, this is a riveting approach to showcasing a band's entire career. I believe Warner Music has set the bar higher for future music apps… and that is a very good thing to do!”

An intimate portrait of the band enjoying a drink at the Hard Rock Café — taken by legendary photographer Henry Diltz during a shoot for the Morrison Hotel album — greets visitors on the home page and guides them on a journey through the living history of one of rock’s most fascinating and incendiary groups.

THE DOORS APP is divided into several sections, with the The Story button leading to the true centerpiece, proving endlessly intriguing for both veteran fans and new initiates with hundreds of photos, videos, and interviews. All six albums recorded by the original Doors foursome, as well as the two albums recorded later by the Doors as a trio, are spotlighted here through essays from counterculture icons including Patti Smith and Hunter S. Thompson, Doors historians such as David Fricke, Greil Marcus, and archivist David Dutkowski, as well as pieces from the band and personal reminiscences shared by Holzman. The Story section also highlights extensive technical notes detailing all the equipment used to create every studio album.

Among the other centerpieces of The Story section is a graphic novelization of the notorious Miami Incident, where Morrison was falsely accused of exposing himself during a 1969 concert. The infamous episode comes to life here through drawings by award-winning comic book artist Dean Haspiel, words by Adam Holzman (son of Jac), and rare audio of Morrison recorded during the show. This section also includes the once- confidential FBI report, the arrest report, a portion of Jim’s tongue-in-cheek testimony, Morrison’s mug shot, and his posthumous pardon issued in 2010.

Also featured are a comprehensive Timeline, a Cast Of Characters listing key people in the Doors’ universe, an interactive Doors Map of LA that focuses on prime locations in the band’s history, a Gallery filled with rare and iconic images, all song lyrics, in-app links to social media and the iTunes store, and a customizable My Favorites area. All told, the app features over 500 images including band photos, album art, singles, international releases and memorabilia (posters, ticket stubs, advertisements, press releases, contracts, and related correspondence). The app also includes 44 short form videos and 60 audio segments. Holzman had referred to The Doors app as a “1500 piece jigsaw puzzle in three dimensions, which arrives on your iPad, elegantly pre-assembled.”

THE DOORS APP is available for $4.99 from the App Store on iPad or at smarturl.it/doorsapp

To coincide with the launch of THE DOORS APP, each of The Doors’ studio albums have been Mastered For iTunes by their longtime producer Bruce Botnick and are now available exclusively on iTunes. Three new digital boxed sets (The Complete Studio Albums, Behind Closed Doors – The Rarities, and Strange Nights Of Stone Vol. II – The Bright Midnight Archives Concerts) as well as two Mastered For iTunes compilation albums (The Very Best Of and The Future Starts Here: The Essential Doors Hits) are also available now on iTunes.

THE DOORS official app. More than 700 images and 100 music and sound clips that will delight and satisfy Doors fans. More than just photos, music and video, this comprehensive compilation in presented in a way that lets you re-discover the intensity and originality of Jim Morrison and the Doors.

The foundation of this app is authentic, source material meticulously produced by their record company president Jac Holzman, and endorsed by the members of the Doors.

Since most of the content is built into the app, you can enjoy the pictures, music, sound and video offline, without WiFi or dinging your data plan. Bonus: Includes the option for group viewing on any flat screen TV.

227 Band Photos featuring rare publicity photos and candid shots of all four. 112 images of album and single artwork from around the world 196 images of memorabilia 75 photos of the notes handwritten on the original recording masters tracksheet. (It's like holding Doors history in your hands.) 6 full length original short films for Break On Through, Strange Days, Unknown Soldier, Wild Child, Roadhouse Blues (Live), and the Changeling .

Even better, you can pinch and zoom most of the images to discover details not possible if printed in a book or posted on a website.

MULTIMEDIA SECTION ON EACH ALBUM

Includes the albums The Doors, Strange Days, Waiting for the Sun, The Soft Parade, Morrison Hotel, Absolutely Live, LA Woman, Other Voices, Full Circle, and American Prayer. The story behind each record is revealed through text, photos, videos, music clips, as well as homages from influencers like Patti Smith, Hunter S. Thompson, Francis Ford Coppola and The Doors themselves. It's like getting a mini-app for each album.

LYRIC SHEETS FOR ALL DOOR SONGS

In one place, the complete lyrics for all the Doors' songs including 'Riders on the Storm,' 'The End,' and 'When The Music's Over'

Weaves highlights of the Doors’ history with other musical and historical events ferreting context otherwise unknown. For example you'll learn that Jimi Hendrix released “Are You Experienced" less than a month before the Doors single “People are Strange" and that the Viet Cong attacked the U.S. Embassy in Saigon just 6 weeks before the Doors released “The Unknown Soldier."

Chronicling Jim Morrison's “incident" in Miami along with the original FBI documents, testimony and arrest report.

Learn how the Doors' engineered their signature sound for each album with a photo inventory of the exact equipment used on each one.

The 100+ people most important to the history of the band. Discover information about Jim Morrison and the Doors that you can't find in a Google search.

PRESS & HOLD any item and it will be filed in the apps FAVORITES sections for instant re-access. Super helpful with all this content.

An interactive map of the key places in the Doors L.A. lives.