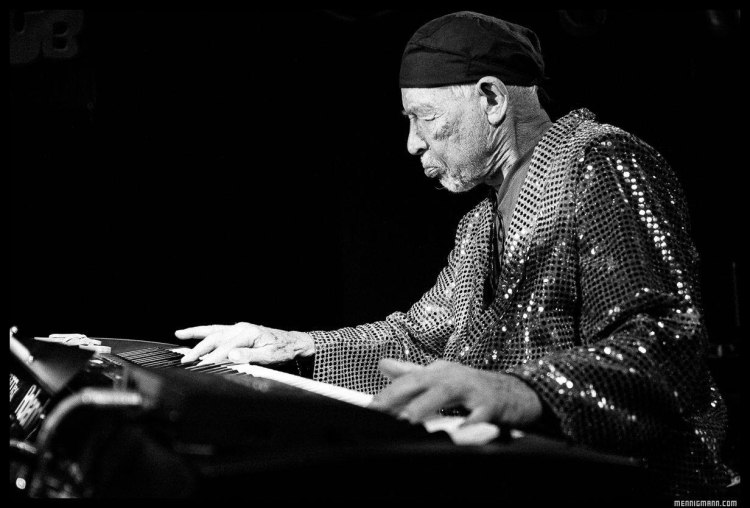 Don was there for the dawn of electronic musical performance, and today grafts new technologies into his experimental palette with software synths & iPhone apps, blending jazz, rock, comedy, magic and ambient synths into a captivating performance.

Mothers of Invention keyboard legend Don Preston and his trio will be performing a free-form Virtual Concert at The World Stage on July 2, 2021!

Don Preston leads a life filled with music, innovation, and experimentation. “Groundbreaking” is a phrase that is clearly overused… with Preston it rings true. One of the first performers to drag a pile of oscillators and filters onstage, he brought his classical training to the avant-garde. In the early '60s a weird guy named Frank Zappa would come to see Preston’s “electronic music with films of bacterial life” shows in Los Angeles. Preston was soon in Zappa’s radical new group The Mothers Of Invention, touring and playing on classics like “We're Only In It For The Money” and “Roxy & Elsewhere” from 1966 to 1973.

Preston’s played with everyone from Elvin Jones to The Residents, Jack Bruce and Robby Krieger. His keyboard solos on Zappa albums, as well as countless soundtracks like Coppola’s Apocalypse Now, are considered ground-breaking moments in synthesizer music history.

Still very active in his 80’s, Don was there for the dawn of electronic musical performance, and today grafts new technologies into his experimental palette with software synths & iPhone apps, blending jazz, rock, comedy, magic and ambient synths into a captivating performance.

“The guy that really impressed me was Don Preston, I didn't know what that stuff was when I heard it on Frank Zappa's records. I said, ‘Man!’” —George Duke

“Revisiting choice moments of weirdness and glory, as well as dig into original works and unlikely standards, is not to be missed. The range of the program is somewhat camouflaged by the seamless interplay of Preston and cohorts. They possess a cohesion born of fluidity that is reminiscent of Paul Bley’s '60s trios, but they have their own crisp edge. It is a high common denominator for such a diverse program.” —Jazztimes

“Preston demonstrated anew that he is one of the most consistently exciting keyboardists anywhere, he plays with an intensity and a rhythmic vitality that approached the demonic, at climactic moments smashing the keys with a forearm and elbow, as if the piano were just not instrument enough for him” —LA Jazz Scene

“Christopher ‘Chris’ Garcia, born in East Los Angeles, California, plays countless percussion instruments and is a composer in many musical ethnological environments such as his family home Mexico…he has made a living as a world musician and has drummed for the ‘Grand Mothers of Invention’ as well as for the classical conductors Kristjan Järvi or various chamber music ensembles.” —Zapanale.de