SOURCE: TWO FOR THE SHOW MEDIA
April 5, 2012
Sign in to view read count 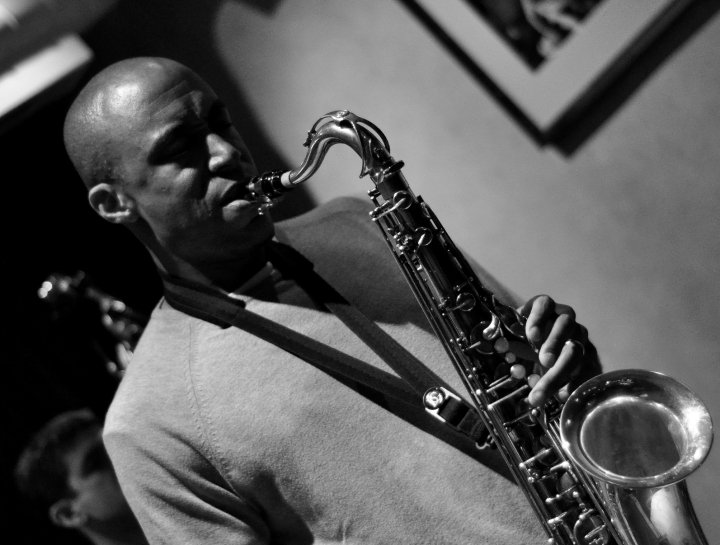 slideshow
Whenever the Chris Greene Quartet takes the stage, jazz and rock listeners notice something immediately: they're sitting next to each other, and that doesn't happen all that often on today's scene. As jazz strives to find new audiences, the CGQ is already admired for its ability to “cross over" and reach music-lovers raised on pop—but without “selling out" the formative principles of the jazz tradition.

With several CDs and a DVD to their credit, the quartet now stands poised at the next plateau of critical and popular success. A Group Effort, their new “live" album, will surely further their reputation as band on the run, gathering converts from across the stylistic spectrum as they go.

The CGQ will celebrate the release of the new disc with an 8 PM show on May 24 at Mayne Stage in Chicago (1328 W. Morse). This set marks a return to where it all started: A Group Effort was recorded in front of an enthusiastic audience at Mayne Stage last October.

Veteran jazz critic Neil Tesser writes in the liner notes to A Group Effort, “. . . saxophonist Chris Greene and his simpatico teammates demonstrate their spirited approach to the jazz conundrum: How to keep the music fresh and new, without resorting to foolishness that dilutes the idiom's power and promise? For Greene, the answer lies in using familiar materials - the funk and hip-hop he heard growing up - as a bridge to younger listeners looking for more."

On seven original compositions, plus the jazz standard “Blue Bossa" (which dates to the mid-60s), the CGQ folds these multiple influences into layered rhythms and catchy melodies. The band's own compositions reflect their appreciation for modern singer-songwriters - such as Madonna and the Black Eyed Peas, whose music they have covered on previous discs - as well as material that lends itself to the deeply interactive improvisations, a characterization of every CGQ performance.

“It's important to me to build a group with an evolving sound, and four guys striving to be better on their instruments and also better collaborators," explains Greene. He adds that it is also important to convey on CD the experience of hearing the band in person. As he puts it, “The band you hear on the disc, and on the radio, is the same group you would come to see."

But any in-concert recording poses an inevitable tradeoff. On one hand, it enables the listener to hear a band within the adrenaline-charged environment of a “live" performance; on the other hand, it forces the musicians to give up the acoustical control afforded by the studio setting. In order to minimize this loss of control, the CGQ chose one of the most acoustically advantageous performance spaces in Chicago - the Mayne Stage theater, which has its own in-house recording and broadcast studio - and then raised the stakes by bringing in veteran engineer Joe Tortorici to handle the session.

“The Mayne is a unique recording environment," explains Tortorici. “I wish there were more like it. The electronics are pristine, and the Pro Tools system is robust." And, he says, the sheer size of the room, with is ample dimensions and high ceiling, is an engineer's dream. “There is no substitute for air, in the acoustic sense," Tortorici adds, pointing to the difference between natural reverberation and electronic imitations of this effect. “What a joy it is to open the room microphones and hear a naturally occurring, diffuse ambience, at about two seconds - perfect linear decay. I have no doubt as to the enriching and positive effect it had on the recording.

“I think about the many very talented young recording engineers in town and realize the leap of faith Chris took with me, the 'old guy.' But it was ultimately about the content. The guys performed flawlessly and all I had to do was reflect that."

“The guys" are pianist Damian Espinosa, bassist Marc Piane, and drummer Steve Corley; they make up the tightly bound rhythm section of the CGQ, which coalesced in 2005. (Espinosa and Piane were original members; Corley joined in 2010). Greene describes their music as “acoustic organic rhythmic guerrilla jazz," drawing its intensity “from the current sounds of rock, funk, fusion, and soul."

Greene himself has been called “a post-bop maverick intent on shaking things up for the mainstream" (by All About Jazz) and “a stupid-funky tenor and soprano player" (by Downbeat). A native of Evanston, Illinois, he started on alto sax at the age of 10, switching to tenor as a member of Trippin Billies (a tribute band covering the music of pop icon Dave Mathews). His resume includes stints with a wide range of artists - from hip-hop star Common to Chicago acid-jazzers Liquid Soul - and six previous albums: two with his first band, New Perspective, and four with the CGQ, as well as their DVD Based On A True Story (recorded at the world-famous Jazz Showcase in Chicago).

All these productions share the common goal of spreading real jazz to people who may not even know what it is. “People who have this idea that they don't like jazz—or that it's all either Kenny G or Dixieland (with nothing in the middle)—turn out to like what we're doing," Greene says. “And that means more to me than just about anything. But also there's the fact that we have a really nice group of people who come out to see us. So this album in a way is my thank-you to them."