SOURCE: TWO FOR THE SHOW MEDIA
February 26, 2008
Sign in to view read count 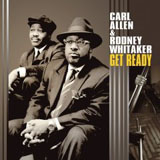 Piccadilly Square (Timeless) was Allen's first CD as leader, released in 1989, followed by The Dark Side of Dewey (Evidence), The Pursuer (Atlantic), Testimonial (Atlantic), and Get Ready, his 2007 Mack Avenue gospel/Motown accented debut release with co-leader, bassist Rodney Whitaker.

He co-founded Big Apple Productions in 1988 with saxophonist Vincent Herring, produced several recordings for several Japanese labels with future stars Roy Hargrove and Nicholas Payton, and created The Art of Elvin, a tribute band dedicated to his two drum influences. He currently leads his exceptional quintet and Carl Allen & New Spirit as well as being the co-leader of the Allen-Whitaker Project with bassist Rodney Whitaker. Allen also produced recordings for pianist Eric Reed, Dewey Redman. Pharoah Sanders, Freddie Hubbard and guitarist Lage Lund, the winner of the 2005 Thelonious Monk International Monk Competition and many others totaling nearly 70 credits as a producer. A talented educator, Allen has served on the jazz faculty at Julliard since 2001 as coordinator of Small Ensembles and drum instructor. He is serving as the Interim Artistic Director of Jazz Studies.

Carl Allen's multifaceted career provides the perfect template for what a modern musician should be. As Sid Gribetz of Jazz Times wrote, “[m]ore than just another fine drummer, Carl Allen has it all together as a bandleader, businessman, and producer, becoming a force in today's jazz world."

Allen maintains an exhaustive schedule of recording, touring and teaching. He remains active as a leader (most recently co-leading The Carl Allen - Rodney Whitaker Project, leading The Carl Allen & The Art of Elvin - a musical tribute to Art Blakey and Elvin Jones), New Spirit and as an in-demand sideman (recent recordings with Jackie Ryan, Wayne Escoffery, Alex Graham, Barbara King and many others).

Rodney Whitaker is a Michigan treasure and one of the worlds renowned Jazz bass performers and educators. A Detroit native, he grew up in the city soaking in the sounds of jazz/classical music and working/studying with the finest musicians in the city-- Marcus Belgrave, Kenneth Cox, Donald Walden, Randy Gelispie, Stephen Molina, Robert Gladstone, Francisco Mora-Catlett, Alma Smith, Shahidah Nurullah and many, many others. Building on his Detroit roots and enormous talent, Whitaker went on to earn an international reputation as one of the worlds finest jazz double bass performers. He completed a seven-year tenure as bassist with Wynton Marsalis Sextet and the Lincoln Center Jazz Orchestra. He has toured the world over the last twenty years, collaborating with legendary performers such as Dianne Reeves, Mulgrew Miller, Diana Krall, Terence Blanchard, Kathleen Battle, Cyrus Chestnut, Gerald Wilson, Carl Allen, Hank Jones, Marian McPartland, Johnny O'Neal, Kenny Burrell, Bob James, Benny Golson, Kenny Garrett, Branford Marsalis, the late John Lewis, Tommy Flanagan, Kevin Mahogany, Jon Carl Hendricks, Wycliffe Gordon, Jon Faddis, Vanessa Rubin, Betty Bebop Carter, Jimmy Cobb, Curtis Fuller, Donald Byrd, Dizzy Gilispie, Johnny Griffin, Joshua Redman, Cassandra Wilson, Pat Methany, Chick Corea and Roy Hargrove as well as with leading symphony orchestras. Now based in East Lansing, Whitaker continues to remember his Detroit roots, serving many of the citys talented students as Director of the Detroit Civic Jazz Orchestra, Musical Director for Jazz Education at the Detroit Symphony Orchestra, and Director of the Jazz in the Studio Mentorship Program and summer jazz camp in cooperation with the Arts League of Michigan. Currently, he is on Michigan State Universitys faculty as Director of Jazz Studies and Associate Professor of Jazz Bass and has built a leading jazz degree program and performing faculty, Michigan State University Professors of Jazz as the Artistic Director. His legacy of teaching promises to be distinguished, with former students currently performing with jazz greats such as Wynton Marsalis, Dianne Reeves, Stephon Harris and many others.

Concerts begin at 7 p.m. Tickets are $18 in advance and $20 day of the performance unless otherwise noted, and include admission to the Museum's galleries.