The Brief Genius of Alice Clark 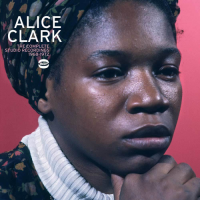 When Bob Shad started Mainstream Records in 1964, his mission was to record what he liked. Freed from the confines of Mercury and EmArcy in the 1950s, Shad created a catalog at Mainstream that was highly diverse, from Johnny Mandel's Harper soundtrack to Big Brother & the Holding Company's first album. One of the artists he felt obliged to record was singer Alice Clark.

Not much is known about Clark or how she came to the attention of Shad i 1971. My guess is that arranger-conductor Ernie Wilkins had something to do with that discovery. Up until then, she had only recorded a few singles. Clark clearly was a church-rooted soul-gospel belter, and the songs chosen for the 1972 album, Alice Clark, were obscure but brilliantly written and shrewdly orchestrated. Someone had enormous taste in the choices.

Clark grew up in Brooklyn's Bedford-Stuyvvesant neighborhood and recorded only briefly in New York between 1968 and 1971 for a Jubilee subsidiary. According to Dean Rudland's liner notes for Alice Clark: The Complete Studio Recordings 1968-1972 (BGP Records), Clark wasn't in a good place. Billy Vera, who wrote and produced her first recordings, said “I got the impression her life wasn't that great. She... had kids and belonged to a religious order that forbade either bathing or washing hair, I don't recall exactly which..."

The songs are Jimmy Webb's I Keep It Hid, John Bromley and Petula Clark's Looking at Life, Leonard Caston's Don't Wonder Why, John Kander and Fred Ebb's Maybe This Time (From the Motion Picture “Cabaret"), Juanita Fleming's Never Did I Stop Loving You, Bobby Hebb's Charms of the Arms of Love and Don't You Care, Leon Carr's It Takes Too Long to Learn to Live Alone, Bobby Hebb's Hard Hard Promises and Earl DeRouren's Hey Girl.

While Clark's recordings resonated with the Northern Soul movement in the U.K., the album fell flat in the U.S. While Shad knew plenty about producing a great album, the market had changed by the early 1970s. Black FM radio needed album singles that stood out during “drive time" programming, and this album's songs weren't hook-driven. It was too sublime, too poetic. Given the power of Clark's voice, it's surprising she didn't come to the attention of Creed Taylor after this album came out. She would have been perfect on Creed's CTI subsidiary, Kudu.

Clark left the music business after her eponymous album fizzled, likely because she had left everything on the table. She must have believed that if the music on this album didn't connect with the market, nothing she recorded ever would. In the hands of a more commercially minded soul producer, she might have fared better. As we listen now, the music Shad recorded was extraordinary—a soul masterpiece, a gospel game-changer and an emotional document that arrives just as soul was become more romantic and insistent.

JazzWax clips: Here's Never Did I Stop Loving You...

And here's Charms of the Arms of Love...