SOURCE: ALL ABOUT JAZZ PUBLICITY
December 5, 2018
Sign in to view read count 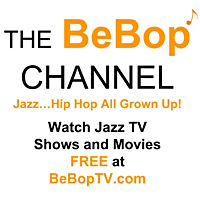 slideshow
The first television station focused solely on jazz culture launched this week; The BeBop Channel is an OTT channel available at beboptv.com and on Amazon Prime Video. The channel, identified as “Jazz – Hip Hop all Grown Up”, was created out of the realization that jazz lovers are relegated to PBS-style documentaries if they have interest in video programming.

The BeBop Channel promotes the overall jazz culture through scripted television series, reality-based shows, lifestyle magazine programming and films—featuring the music, of course, but also the lives of the musicians, dancers, and other artists, along with the culinary, fashion and overall culture of the Jazz lifestyle—‘BeBop’. The producers also believe that this Channel will help bring Jazz back to the mainstream of popular culture and introduce Jazz to new audiences.

Duke Ellington Orchestra, Art Blakey and Broadway's Five Guys Named Moe alum Gregory Charles Royal, creator and visionary behind The BeBop Channel, believes the channel has something for everyone whether it's Giant Steps, a scripted series that stars renowned Jazz musicians as the actors including Royal, legendary bassist Mickey Bass, and saxophonist Mark Gross (who was also in Five Guys Named Moe and leads a band with Delfeayo Marsalis) who are struggling to open a jazz club in Harlem; or the reality-based series New York Jazz Diaries, a series of video diaries giving an intimate peek into the lives of actors, dancers and other performers pursuing their dreams, including Ain't Misbehavin' original drummer Ken Crutchfield; and for film-buffs, The BeBop Channel, showcases films from the New York Jazz Film Festival, which was started three years ago to support filmmakers who feature jazz artists as actors, or jazz as the primary focus of their films. The The BeBop Channel will also launch The 1,2,5th early next Spring. The 1,2,5th will be a lifestyle magazine show, hosted by “America’s Psychologist” Jeff Gardere from VH1's Love and Hip Hop, that will feature Jazz-loving celebrities showcasing their hobbies in fun and dynamic situations.

According to Royal, “Jazz was once the most celebrated music in this country—it is the most original American art form—but it has become sidelined to small, elite clubs and academia. This effort, first and foremost, entertains people, but it will also help to bring Jazz back into the mainstream pop culture as artists like Ice Cube and Ice Tea have successfully done for Hip Hop through acting and other forms of entertainment."

The Bebop Channel, which is free to the public and ad-supported, is offering free 30-second spot advertisements to artists, publications, club owners, restaurants, etc. in exchange for embedding the BeBop Channel's broadcast on their website, blog or stream on their televisions and at their business establishments. Interested parties can contact Sue Veres Royal at [email protected].