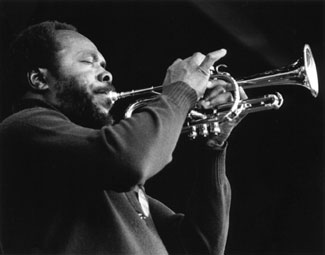 slideshow
In February 1977 (I'm guessing), Thad Jones was rehearsing his orchestra in preparation for a performance with Dexter Gordon as guest soloist. I've narrowed the year to '77 because Gordon returned to the U.S. in 1976 and signed with Columbia and Jones left for Denmark abruptly in 1979. Gordon's famed Homecoming recording was in December '76. Since it's clear from the following video that the date was his birthday, I've narrowed the day to February 27, 1977.

Last year, a home video surfaced of Jones rehearsing his orchestra on several songs. I threw it to saxophonist Bill Kirchner, who played with the band at the Village Vanguard. He had this to say about the pieces:

Marc, I don’t know the first piece. The second is Thank You, composed and arranged by Jerry Dodgion for the Jones/Lewis band on their New Life album. The third is Thad’s Fingers, from the Consummation album.

Here's the Thad Jones rehearsal and a surprise appearance at the end. Wait for it...