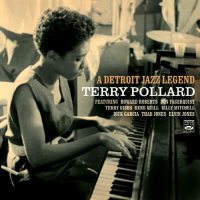 Somewhere out there in the Detroit region there are unreleased tapes of Terry Pollard. The accomplished female pianist and vibraphonist recorded only one solo album, for Bethlehem in Los Angeles in January 1955. She began her recording career in the early 1950s in Billy Mitchell's Detroit quintet. Then thanks to the keen eyes and ears of vibraphonist and bandleader Terry Gibbs, she joined his band and recorded seven albums with Gibbs from 1953 to 1956. She also appeared on TV with him that year. In 1958, Pollard retired from her music career to raise a family but in the years ahead she led a trio at Detroit's Hobby Bar, performing with touring artists.

Someone must have tapes of her playing at the Hobby Bar. Hopefully label gumshoes who specialize in unearthing such unreleased material will find recordings by Pollard, who is woefully undocumented. For now, Fresh Sound has just remastered in mono (24 bit) and released Pollard's Bethlehem leadership album as well as select recordings as a sidewoman.

Chronologically, this Fresh Sound album begins with Blue Room, which Pollard recorded with Billy Mitchell (ts), Thad Jones (tp), Pollard (p,vib), Alvin Jackson (b) and Elvin Jones (d). Then comes It Could Happen to You and Stompin' at the Savoy from guitarist Dick Garcia's A Message From Garcia, featuring Gene Quill (as), Pollard (p), Garcia (g), Bill Anthony (b) and Frank Isola (d).

The next eight tracks are from Terry Pollard on Bethlehem from January 1955, featuring Don Fagerquist (tp), Terry Pollard (p), Howard Roberts (g), Herman Wright (b) and Frank DeVito (d). The cover featured only a series of blurry lights, which allowed buyers to think Pollard was a white male.

And finally, three from Gibbs's Mallets-a-Plenty recorded in June 1956, with Gibbs (vib), Pollard (p), Herman Wright (b) and Jerry Segal (d). The tracks are Then It Happens, I'll Remember April and Mean to Me.

Every track on this Fresh Sound release is a joy, and the remastering makes the album a must own. Pollard, Hazel Scott and Marian McPartland remain the queens of the jazz piano in the 1950s. Mary Lou Williams was in a league of her own.

JazzWax clips: How remarkable was Terry Pollard? Here she is with monster vibraphonist Terry Gibbs, Herman Wright (b) and Jerry Segal (d) playing two songs on the Tonight Show with Steve Allen in 1956...