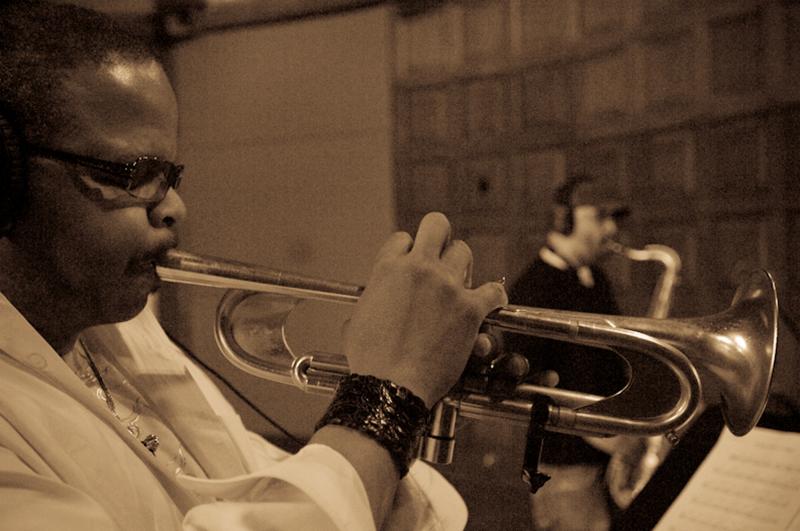 slideshow
Coral Gables, FL&#151Five time Grammy Award winning jazz trumpeter and film composer Terence Blanchard was named Artistic Director of the Henry Mancini Institute (HMI), a prestigious program at the University of Miami Frost School of Music that is training a new generation of orchestral and jazz artists to create and perform in mixed-genre, collaborative settings.

Blanchard has established himself as one of the most influential jazz musicians and film score masters of his generation, a member of a jazz legacy that has shaped the contours of modern jazz today. With more than 29 albums to his credit, as a musician Blanchard is a multi-Grammy Award winner and nominee, winning last year for “Best Jazz Instrumental Solo" for his performance on Jeff “Tain" Watts' project, “Watts." In 2009, Blanchard won for his instrumental solo for “Be-Bop" on Live At The 2007 Monterey Jazz Festival. In addition to receiving the award, Blanchard performed live on the telecast along with other New Orleans artists including Lil' Wayne, Allen Toussaint and the Dirty Dozen Brass Band, who were all joined on-stage by singer Robin Thicke. In 2008, Blanchard also won a Grammy for his CD, A Tale of God's Will (A Requiem for Katrina), a beautifully haunting and impassioned song cycle about Hurricane Katrina and the ravages incurred upon the City of New Orleans and its residents.

As a film composer, Blanchard has more than 50 scores to his credit and received a Golden Globe nomination for Spike Lee's 25th Hour. In 2009, Blanchard loaned his musical voice to Louis the Alligator in The Princess and the Frog. He completed the score for Lee's Miracle at St. Anna, as well as the soundtrack for Darnell Martin's Cadillac Records. He is currently working on the score for two Broadway plays, The Mother——— with the Hat, produced by Scott Rudin ("The Social Network" and “True Grit") and A Streetcar Named Desire; George Lucas' film about the Tuskegee Airmen entitled, Red Tails; and a commission for Opera Theatre of St. Louis. Other film music written by Blanchard includes Kasi Lemmons' Eve's Bayou and Talk to Me, Oprah Winfrey's Their Eyes Were Watching God, Tim Story's Barbershop and Ron Shelton's Dark Blue and music for over one dozen Spike Lee films or documentaries.

As Artistic Director, Blanchard will conduct the Mancini Institute Orchestra and introduce its musicians to a wide range of musical styles that will prepare them for the changing world of music they are about to enter, such as performing and recording the music of iconic film composers, multi-media recording for television specials, and providing multi-cultural and multi-style performance and recording opportunities. The Mancini Institute Orchestra is comprised of a full orchestra (strings, woodwinds, brass, percussion), plus an additional complement of jazz instruments (saxophones, trombones, trumpets), world percussion and rhythm section instruments (piano, bass, drums, guitar). The ensemble also performs in smaller chamber music configurations throughout the year.

“Terence Blanchard is ideally suited to lead the Henry Mancini Institute," says Shelton Berg, dean of the Frost School of Music. “He is a brilliant and inspired musician, with almost an unmatched panoply of skills. Terence is also a wonderful and inspired teacher, and he will play a leading role in fostering great musicians of the future."

Blanchard will travel to Miami to work with the Henry Mancini Institute regularly throughout the year. He will be supported in his efforts by violinist, arranger and HMI resident conductor Scott Flavin, and HMI outreach coordinator, Stephen Guerra.

Graduate students who participate in the program are recruited to become “Mancini Fellows," receiving free graduate tuition from the University of Miami and financial stipends that are funded through private donations. The Henry Mancini Institute is the recipient of a John S. and James L. Knight Foundation Arts Challenge grant, with matching funding from UM trustee and business leader Adrienne Arsht.

About the Frost School of Music

The Phillip and Patricia Frost School of Music is a world-class music institution with 100 faculty members and 700 students located on the Coral Gables campus of the University of Miami. The mission of the Frost School of Music is to foster musical leadership by providing an innovative, relevant, and inspiring education; advance performance, creativity and scholarship; and enrich the world community with meaningful outreach and brilliant cultural offerings. The Frost School is the exclusive home of the Henry Mancini Institute which provides students with cross-genre performance opportunities in real-world professional settings, and the Bruce Hornsby Creative American Music Program which develops the creative skills of talented young artist/songwriters by immersing them in the diverse traditions of American songwriting.