SOURCE: ALL ABOUT JAZZ PUBLICITY
February 3, 2012
Sign in to view read count 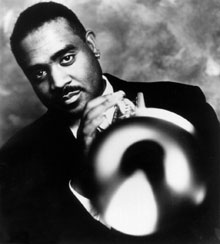 slideshow
Terell Stafford Quintet continues the Kimmel Center's 2011/12 Jazz Up Close Series, which honors Philadelphia jazz legends, with a tribute to Philly born hard-bop trumpeter, Lee Morgan, on February 25, 2012 at 7:30 p.m. in Perelman Theater. The quintet will perform a bebop-infused program of select works from the legendary composer, arranger and musician's catalogue of music, as well as works from Terell Stafford's latest 2011 release, This Side of Strayhorn. Trumpeter Terell Stafford will be joined on stage by Bruce Barth (piano), Dana Hall (drums), Tim Warfield (tenor saxophone), and Peter Washington (bass).

Students from Temple University's Jazz Studies program will perform on the Commonwealth Plaza stage from 6 p.m. to 7 p.m. as part of the Kimmel Center's Live from the Plaza Stage free concert series.

One of the great players of our time, a fabulous trumpet player" legendary pianist McCoy Tyner comments on Terell Stafford

Tickets for Jazz Up Close Celebrates Lee Morgan are $35 and $40, and are available by calling 215-893-1999, online at kimmelcenter.org or at the Kimmel Center Box Office located on Broad and Spruce streets, Philadelphia , Pa. 19102 (open daily from 10 a.m. to 6 p.m., later on performance evenings).

Terell Stafford currently serves as Professor of Music and Director of Jazz Studies at Temple University , where he was a recent recipient of the University's “Creative Achievement Award." A gifted and versatile trumpeter with a voice all his own, Stafford's newest release, This Side of Strayhorn (MAXJAZZ 2011) features Tim Warfield, Bruce Barth, Peter Washington, and Dana Hall, and has been called “the first must have album of 2011" and “genius."

Stafford is a member of the Grammy award-winning Vanguard Jazz Orchestra, the Grammy nominated Clayton Brothers Quintet, and the Frank Wess Quintet; and has performed with groups such as Benny Golson's Sextet, McCoy Tyner's Sextet, the Kenny Barron Sextet, the Jimmy Heath Big Band, and the Jon Faddis Orchestra. He is a former member of the faculty at the Juilliard Institute for Jazz Studies. He has appeared on The Tonight Show with Jay Leno and You Bet Your Life with Bill Cosby and can be heard on five albums as a lead trumpet player including his debut album, Time to Let Go (1995), critically acclaimed Centripedal Force (1997), Fields of Gold (2000); New Beginnings (2003), and Taking Chances (2007).

Between 2006 and 2007 Stafford played an integral part on several albums, including Diana Krall's Grammy nominated From this Moment On (2006) for which Stafford joined with the Hamilton-Clayton Jazz Orchestra. In celebration of Jimmy Heath's 80th birthday, Stafford recorded with the Jimmy Heath Big Band for the album Turn Up the Heath (2006). As a sideman Stafford has been heard on over 90 albums.

Stafford received a Masters of Music from Rutgers University in 1993 and a Bachelor of Science in Music Education from the University of Maryland in 1988. He sites Clifford Brown, Dr. William Fielder, Bobby Watson, Victor Lewis, and Shirley Scott, as strong influences in developing his own uniquely expressive balance of lyricism and melody in performing.