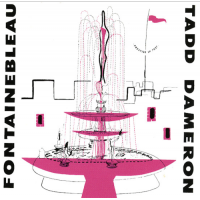 The players on the album come together well, as if carefully selected for their tones. Dorham's spirited trumpet playing is paired with Coker's mournful trombone and the deliberate reeds of Shihab, Alexander and Payne. Behind them, the rhythm section swishes along, powered by Wilson. Dameron on piano is an entity unto himself.

Fontainebleau is a concept-album tribute to the one-time palace and weekend getaway of the French nobility southeast of Paris. When Dameron saw the landscape and Château de Fontainebleau in 1949, he was emotionally touched by the visiual beauty and symmetry. The forest, lake dotted with white swans and magnificent chateau float into each other, and Dameron's pieces seem to do the same.

If we think of the first track, Fontainebleau, as the concept's overture, one can visualize the rising sun crash through the foliage and across the sprawling lawns. The quick-paced Delirium seems to depict the animals dashing about in the forest. The Scene Is Clean sounds like an ode to the swans floating across the water without disturbing the surface. Flossie Lou depicts the architectural exterior of the palace while Bula-Beige, clocking in at more than 11 minutes, seems to be a guided tour of the majestic interiors.

For me, the album is as perfect as a panoramic landscape painting of the site. The music is delicate and cohesive, and the solos celebrate the vistas that dazzle the eye.

JazzWax clips: Here's all of Fontainebleau...

Here's The Scene Is Clean...