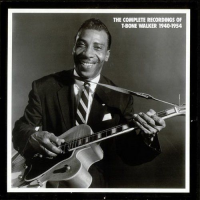 In the early 1940s, when African-Americans in the South and Southwest moved north to the Midwest and west to Los Angeles in search of job opportunities at war-time factories, they packed their souls. As the Great Migration filled cities such as Chicago, Detroit and Cleveland and South Central in L.A., transplants from places such as Mississippi and Alabama longed for the Delta blues they heard back home. Once settled in cities, many of these migrants wanted the blues served up as dance music, providing them with a country sound seasoned with urban flavoring.

So in the mid-1940s, blues dance music began to emerge as a major genre. By 1948, the drums, saxophone and electric guitar were key instruments in the rise of jump blues. Blues shouting also became a favored combination of rural and urban vocalizing. The jump blues was so addictive and popular, it became the essence of rock 'n' roll in the early 1950s.

One of the most important figures in the development of the electric guitar in jump blues was T-Bone Walker. Born in Linden, Texas, Walker was exposed to music early. Both of his parents were in a band, and early blues guitarist Blind Lemon Jefferson was often at his family's house. By the time Walker was 15 in the 1920s, he was already a professorial musician. His first recordings were for Columbia in 1929. In 1935, Walker married and moved to Los Angeles, playing clubs on Central Avenue and recording in bands led by Les Hite and Freddie Slack.

From 1946 to 1948, Walker was recorded as a leader by Black & White Records. From 1949 to 1954, he recorded for Imperial. Singles made for Atlantic in 1955, '56 and '59 were released on T-Bone's Blues, a highly influential album for rock guitarists of the 1960s. On the album, you can hear Walker's modern attack on the instrument. Instead of furiously picking at the strings, he let notes ring, bent strings for effect and played the guitar so it would sing his melodies.

On T-Bone Blues, there are blues-shouter vocals such as Mean Old World, jump blues such as T-Bone Shuffle, a song that the Allman Brothers would later leverage (Call It Stormy Monday), strong mid-tempo blues (Blues for Marili), strolling blues (Evenin') and blues with a rockabilly feel (Shufflin' the Blues). The personnel varies across the tracks from three different time periods, but the kick and hopping feel are strong throughout.