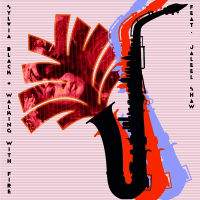 A cinematic slice of late-night jazz-pop exotica, the feverish track (which is featured in the upcoming Dean Dempsey film Deadman's Barstool) is just a hint of the brilliance to come from the acclaimed Southern Gothic chanteuse who has collaborated with such artists as Moby, The Knocks, Kristeen Young, The Black Eyed Peas, Télépopmusik, William Orbit, Spank Rock and Santigold, and more, amassing sales of over six million units worldwide. In recent months, Black has performed successful lounge residencies at The Roxy and Happy Ending in New York.

Black will be appearing at New York's Bowery Electric club tonight, July 27, and will be performing alongside Kristeen Young during Young's residency each Wednesday in August at Los Angeles' Redwood Bar.