SOURCE: ALL ABOUT JAZZ PUBLICITY
September 15, 2008
Sign in to view read count 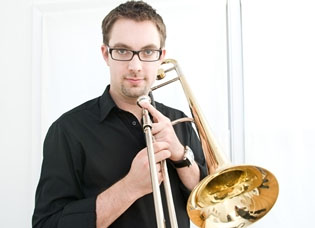 On several tracks from Home, Oscar plays electric trombone, and, in addition to the appearance of DJ Black Cat Sylvesta, this unique approach to trombone gives the listener a new sound that creates unexpected and interesting soundscapes. Other regular members of the Oscar Utterstrom Quintet are keyboardist Paul Horton, bassist Russell Wright, and drummer Justin Amaral.


Home was recorded and mixed by Dani Amendola in October 2007 and January 2008 at Big World Studios in Nashville, TN. Oscar started playing the trombone at the age of ten. He began his musical career at the music school in Vxj, Sweden. When Oscar was twelve, he moved with his family to Belgium where he continued playing in various bands, including blues bands, concert bands and fanfare orchestras. Oscar studied trombone at Boston's Berklee College of Music, where he majored in Music Business/Management. While at Berklee, he was mentored by the likes of Phil Wilson, Hal Crook, Jeff Galindo, Tiger Okoshi, Lin Biviano, and Charles Lewis.

Today, Oscar is very active on the music scene in the southeastern US. Internationally he has performed in China, South Korea, and Europe. When not performing with his own group, he can be heard with groups such as the Dynamites, the Christina Watson Quintet, Halfbrass, and the Nashville Jazz Orchestra. As a freelance trombonist, Oscar has had the opportunity to perform with acts such as the Temptations, Wycliffe Gordon, Jeff Coffin, David “Fathead" Newman, Nils Landgren, Kirk Whalum, the Four Tops, and My Morning Jacket.

If you would like more information or schedule an interview with Oscar, please call Right Turn Records at (615) 469-4803 or send an email.