Savory and satisfying... Couched in the chamber jazz sound, it is perfectly timed and sequenced, showcasing the storytelling vocals of Susan Krebs and the nuanced textures of her chamber band, a quartet that blends strings and winds to novel, enthralling effect. —DOWNBEAT 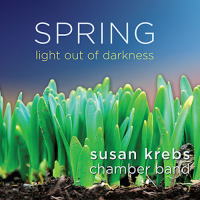 slideshow
Spring: Light Out of Darkness is Susan Krebs’ sixth album as a leader and the second CD project for the Susan Krebs Chamber Band. “Spring" is the follow-up to the Chamber Band’s 2015 acclaimed release, Simple Gifts, taking the chamber band concept even further on this new project.

Chamber music is defined as “music composed for small instrumental ensembles and performed without a conductor. Traditionally intended for performance in a room or reception hall, often solely for the performers’ own pleasure.” The idea for the jazz chamber band grew from salons hosted by jazz vocalist Krebs at her home. She calls these salons “ThemeScenes,” in which she and a small group of her close friends get together in front of an invited audience to explore various motifs through wide-ranging music, poetry and spoken word.

Performing in an intimate space to a small audience of music lovers required Krebs to make creative choices about the instrumentation. There is no drum kit or bass on this project. Rather, the band, which is made up of some of the finest jazz musicians in Southern California, creates a full, rich and stirring sound with just piano, percussion, woodwinds, and a violin. Rich Eames, the versatile pianist, composer and arranger, who is Krebs’ longtime friend and musical collaborator, plays on this disc and arranged six of the seven tunes. Rob Lockart, on woodwinds, is a busy sideman, who has performed with the Woody Herman Orchestra, Tom Harrell Big Band, Doc Severinsen Big Band, and Kurt Elling, among others, as well as appearing on numerous scores for TV and film. Master percussionist Scott Breadman has performed with Jose Feliciano, Lindsey Buckingham, and The Rippingtons, among many top music acts. Luis Mascaro is the newest member of the Chamber Band. The Brazilian violinist, who is part of a new generation of creative string players, was one of the few musicians to perform live at the 50th Grammy Awards with the Foo Fighters.

Although Krebs has created the central vision for the Chamber Band, the music they make is a conversation between kindred spirits who have an engaging synergy that comes from a deep familiarity and a shared musical vision.

The overarching concept that binds the seven tunes on this CD is renewal. Like many people today of all stripes, Krebs is concerned about the problems that beset our country and, indeed, the whole world. For Krebs, change has to begin on a personal level. She connects to the world both as a musical artist and as a serious gardener, attuned to the rhythms of the natural world. Each of her previous CDs reflects her closeness to nature and her philosophical outlook.

The compositions that Krebs chose comprise a mix of musical genres imbued with a jazz sensibility. Two classical pieces, “Spring,” one of the concertos from Vivaldi’s Four Seasons, and Stravinsky’s “The Rite of Spring,” are instrumentals. According to Krebs, “The work we do in our salons is truly collaborative, and most of the music grew organically out of the theme Awakening–Spring & Otherwise. The classical pieces just fit perfectly. I don’t sing every tune during a salon performance, and I didn’t have to sing on every track on the CD. I wanted this recording to really reflect the feeling of the salons.”

Krebs opens with a soulful rendition of Rodgers and Hammerstein’s “Oh, What A Beautiful Morning,” a song overflowing with optimism that sets the tone for the rest of the CD.

Krebs’ voice is sometimes sweet and sometimes throaty, but always suffused with emotion. She and the band put their own bluesy spin on Ray Charles’ “Light Out of Darkness,” the subtitle of the CD. Mascaro and Eames’ soulful solos highlight the song’s gospel-inflected provenance.

Stravinsky described “The Rite of Spring” as “a musical-choreographic work, [representing] pagan Russia... unified by a single idea: the mystery and great surge of the creative power of Spring." Although Stravinsky wrote it for an orchestra, Eames’ arrangement captures its early 20th century modernistic essence overlaid with a contemporary jazz texture.

Krebs was attracted to the innocence and droll metaphor of “Whispering Grass,” a song about lost love that anthropomorphizes the grass and trees witnessing lovers kissing. Written in 1940 by Fred Fisher and his daughter Doris Fisher, the song was made popular by the Inkspots when it was first released.

The band does an atmospheric rendition of “Some Other Time,” the bittersweet song by Leonard Bernstein with lyrics by Comden and Green. Eames’ arrangement implies the passing of time through its rhythmic structure.

Krebs wanted to include “You Must Believe In Spring” because of its message of hope. The song opens with the lyrics, “When lonely feelings chill / The meadows of your mind / Just think if winter comes / Can spring be far behind.” For Krebs, the avid gardener, bird lover, vocalist, and impresario, you must believe in spring and love in this life fraught with troubles and uncertainties.

Spring: Light Out of Darkness is infused with a reverence for nature, and, as with all of Krebs’ recordings and live performances, it is also imbued with her hopeful vision and generous soul.

Spring: Light Out of Darkness is available in stores and online everywhere.