Whether solo performer, trio, quartet, quintet, the right formula of musicians synchronize as a single vibratory energy to engage the listener in a conversation within the music. Each person vibrates in his or her own key. When the right group of vibrations comes together they create harmony, or one complete vibration. Music saves lives. --Michael “Dr. Bop” Anderson 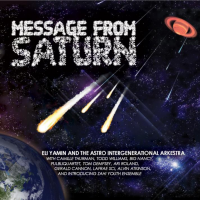 "Saxophonist Knoel Scott told me Sun Ra came into rehearsal and said, 'I just got a message from Saturn. We are not playing enough blues!' I thought about this for ten years, then joined up with Clifford Carlson to write this story." —Eli Yamin

Liner notes from Message From Saturn

A Space Odyssey of three young people on a galactic adventure to learn the healing power of The Blues.

The Jazz Drama Program is a non-profit organization that helps youth discover jazz and blues through school outreach programs, teacher trainings, and through its unique musicals written on socially relevant themes especially for young performers.

Jazz arts for a better world!

The producer of the project is Jeff “The Jedi Master" Jones.

According to the Director of the Sun Ra Archive, Michael “Dr. Bop" Anderson, “Music is a vibratory language that speaks through musicians to the soul of everyone who beholds their performance. With the purity of music like Jazz, Blues and Classical expressed through musical groups, listeners hear the unspoken word and message within The Music. In Jazz and Blues; syncopation is the universal Tongue and syncopated gestures connect all cultures. A person can be from Japan, Italy, France or the United States speaking only their native language, but while in the Jazz club, patting feet, shaking heads, eye contact and a smile communicate the music is happening and everything is going to be alright."

The Making of Message From Saturn Cast Album

The recording session with the band took place on August 31, 2013 in Studio C at Avatar Studios. The band consisted of Eli Yamin on piano, Todd M. Williams on sax, Tom Dempsey on guitar & electric guitar, Ari Roland on bass and Alvin Atkinson on drums / percussion. The session was engineered by Jim Anderson.

The vocalists were selected from three vocal workshops conducted by Jazz Drama Program Artistic Director Eli Yamin and Founder of Somatic Voicework Jeannette LoVetri that began in February 2014. Once the vocalists were chosen, rehearsals continued weekly for several weeks leading up to the recording session at Avatar. The vocalists were recorded on June 23, 2014 in Studio B at Avatar Studios. The session was engineered by Jeff “Jedi Master" Jones.

A grand compliment goes to the band for their expert interpretations on all performances. Thematically, the production focuses around the universal elements Earth, Water, Air and Fire, the planet Saturn and its message to the people of earth through cosmic forces (Sun Ra).

The message is the healing power of The Blues and with each composition the presentation compositionally expounds on the theme instrumentally as an interlude or with a spoken or sung lyric as an extended musical composition. What stands out about the interaction of the projects young people is they are allowed to let their inner voice speak about subject matters and questions looking for answers we all, as children, have faced. The subject matter, through song, addresses issues from a young person's point of view. With their voices comes the clarion call to listen for answers that come in the form of music with a message. Each generation is wiser than the next and they naturally seek guidance or direction.