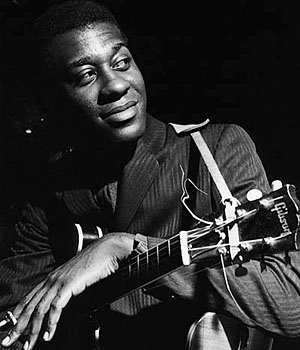 slideshow
This week, we take a brief respite from previewing upcoming performances for a look at the recent documentary film The Grant Green Story.

Born in St. Louis in 1931, Green was a popular jazz guitarist in the 1960s and '70s, recording for Blue Note and other labels and playing most of the major venues of the era. He was just 43 years old when he died of a heart attack in 1979, leaving behind six children and a discography that included more than 100 sessions for Blue Note alone plus numerous other recordings.

Though Green's musical legacy was underappreciated for some time after his death, he was “rediscovered" in the 1990s, thanks in part to the short-lived “acid jazz" phenomenon, and, more importantly, from his work being sampled by hip-hop artists and producers including A Tribe Called Quest, Cypress Hill, Public Enemy, Eric B & Rakim, and most recently, Kendrick Lamar.

Directed by Charles F. Cirgenski and Sharony Green, who's the ex-wife of one of Green's sons, The Grant Green Story reveals details of Green's biography while it “follows the story of a son's search for his father," incorporating interviews with the likes of George Benson (who once called Green his favorite guitarist), Lou Donaldson, Blue Note recording engineer Rudy Van Gelder, St. Louis drummer Kenny Rice, and others.

The film was an official selection for the 2016 Harlem Film Festival, and also was shown at a selection of film festivals that year. Now that it's been released to YouTube, you can see it right here, starting with part one up above and continuing after the jump with parts two and three.

After that, you can see what seems to be the only footage of Green performing that's available online, recorded in October 1969 in Paris, France. Specifically, the fourth video is a set of music featuring Green in a trio setting, backed by bassist Larry Ridley and Don Lamond. In the fifth video, recorded as part of the same session, the trio is joined by guitarists Kenny Burrell and Barney Kessel for another short set.

These two clips document some of the music released for the first time earlier this year by Resonance Records on Funk In France: From Paris to Antibes (1969-1970), a 2 CD/3 LP set that also includes concert recordings Green at the 1970 Antibes Jazz Festival with a different band. At the same time, the label also released Slick!- Live at Oil Can Harry’s, another live recording of Green performing in 1975 at a popular club in Vancouver, BC Canada.

The final video is a promotional film put together by Resonance Records, which tells the story of how the masters were acquired and includes samples from the albums, plus some brief audio excerpts from an interview with Green.

For more about Grant Green, check out his page at the Blue Note Records site, the recent article about the Resonance albums from The New Yorker's Richard Brody, and this 1972 interview with Green, unearthed and republished in 2015.