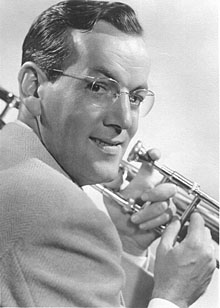 slideshow
How well do contemporary musicians recreate the sound of a band from 80 years ago? This week, let's find out by taking a look at some videos featuring the Glenn Miller Orchestra, which will be in St. Louis to perform next Wednesday, August 14 at the Sheldon Concert Hall.

One of the most successful bands of the Swing Era, Miller's orchestra may not have reached the artistic heights of Ellington or Basie, but they were very popular in the years leading up to World War II and into the 1940s, thanks a catalog of hit songs including “Moonlight Serenade," “String of Pearls," and, of course, “In The Mood."

Historically speaking, the Miller orchestra might have remained a phenomenon specific to their era after the leader disappeared over the English channel in 1944, but in 1946 the Miller estate took the then-novel step of authorizing a “ghost band," led at first by former Miller vocalist and saxophonist Tex Beneke.

The group proved to be a commercial success even without its namesake, and though the estate and Beneke parted ways in 1950, the Miller orchestra was relaunched in 1956 under the leadership of Ray McKinley, and that version of the group has continued to tour under a succession of bandleaders ever since.

The idea of a “ghost band" also subsequently caught on with various other musicians' estates, but other than the Count Basie Orchestra, which continues to tour and record today, the Miller band remains perhaps the most successful of its type. (There also are sanctioned versions of the band that tour in the UK and Europe.)

That's followed by performances of “You Stepped Out of a Dream" and “Blue Evening," recorded in 2018 at the annual Glenn Miller Festival in Clarinda, IA.

After that, there's something a little different: a version of Jimmy Forrest's bluesy standard “Night Train," recorded in February 2014 at Strange Brew in Austin, TX.

Finally, you can check out not one but two different arrangements of Miller's signature song “In The Mood," first in its original arrangement, as replicated by the current band at the 2018 Miller fest, and then in the version edited by Miller into the familiar hit known around the world for the past 79 years.