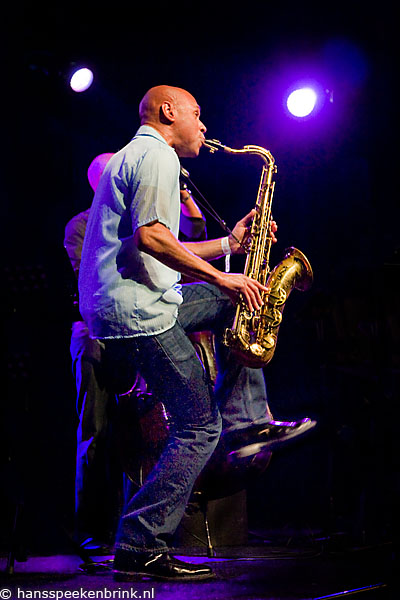 slideshow
This week, our video spotlight shines on The Bad Plus Joshua Redman, the collaborative project in which the critically acclaimed trio of the first part—pianist Ethan Iverson, bassist Reid Anderson, and drummer Dave King, known collectively as The Bad Plus—joins forces with the highly esteemed saxophonist of the second part, Joshua Redman.

This all-star aggregation will be playing this coming Tuesday, April 19 and Wednesday, April 20 at Jazz at the Bistro, and while as of this writing some tickets may remain for the 9:30 p.m. sets, anyone interested in attending should make reservations now, as demand is sure to be high.

Both well-established as headliners on their own, Redman and The Bad Plus have been working together intermittently since 2011 whenever their respective busy schedules permitted, and last year documented the collaboration on an album, also titled The Bad Plus Joshua Redman. Although both TBP and Redman have played multiple times before at the Bistro, with the former making annual visits here in January for a decade now, this will be the first time they've performed in St. Louis together.

So to get caught up, today you can check out a video sampling of their collaborative efforts at various points over the past five years, starting up above with a performance of the Reid Anderson composition “As This Moment Slips Away" as recorded in July 2015 at the studios of radio station KPLU in Seattle.

After the jump, you can see a video of “Beauty Has It Hard", written by Dave King and recorded at the same KPLU session.

That's followed by two full sets, from the 2015 Detroit Jazz Festival and the 2014 Jazz a la Villette festival in Paris.

The last two clips, both recorded in 2012 at the Vitoria Jazz Festival in Araba, Spain, are versions of Anderson's “Silence is the Question" and “People Like You," another of Anderson's works first recorded by TBP on their 2010 album Never Stop.