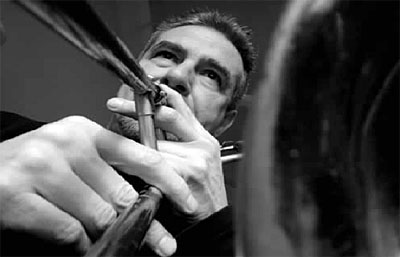 slideshow
This week, let's take a look at some videos featuring trombonist Steve Swell, who will be making his St. Louis debut and kicking off New Music Circle's 2017-18 season with a concert on Saturday, October 7 at at The Stage at KDHX.

Swell will be joined by an all-star assemblage of avant-gardists, including pianist Dave Burrell, known for his solo work and as an associate of major free-jazz artists such as Archie Shepp and Pharoah Sanders; alto saxophonist Jemeel Moondoc, a longtime collaborator of pianist Cecil Taylor and also a bandleader in his own right; drummer Chad Taylor, who's worked with Sanders, guitarist Marc Ribot, and trumpeter Rob Mazurek's Underground projects; and William Parker, the veteran bassist who has recorded more than 50 albums as a leader and also been a key part of the bands of Cecil Taylor, David S. Ware, Matthew Shipp, Peter Brötzmann, and many others.

Though this will be Swell's first appearance as a bandleader in St. Louis, he is a veteran of the international improv and experimental music scene who has collaborated with many musicians known to fans of the genre. A New Jersey native, Swell, who's now 62, broke into the NYC music scene in the mid-1970s as a jobbing musician, playing Top 40, salsa and Broadway gigs as well as with the big bands of Buddy Rich, Lionel Hampton, and others.

Studies with the famed trombonists Roswell Rudd and Grachan Moncur III and a gig with saxophonist Makanda Ken McIntyre's band helped Swell transition into free jazz, and since then, he's released more than 20 albums as a leader of a variety of ensembles, and appears on at least twice that many as a collaborator or sideman. He's played on tour and on record with Parker, Burrell, and Moondoc and with many other internationally known musicians such as Tim Berne, Joey Baron, Herb Robertson, Anthony Braxton, Cecil Taylor, Bill Dixon, Butch Morris, John Zorn, Elliott Sharp, Rob Mazurek, Perry Robinson, and Ken Vandermark.

While there doesn't seem to be any online video available of Swell with the specific group he's bringing to St. Louis, there is footage of him working with all the band's members in various other contexts. So, in the interest of picking up provide some clues as to what to expect from him as an improvisor, composer and leader, as well as how he interacts with these specific musicians, let's take a look.

In the first clip up above, you can see Swell and Parker, along with saxophonists Dave Sewelson and Richard Keene, guitarist Immanuel Childress, and drummer Michael TA Thompson, playing an outdoor gig just three weeks ago at Children's Magical Garden in NYC.

After the jump, there's a clip of the group Swell calls Kende Dreams, with Moondoc, Chad Taylor, pianist Connie Crothers, saxophonist Rob Brown, and bassist Larry Roland, recorded at a gig during Thanksgiving week 2015 at The Stone in NYC.

The remaining videos reach back a bit farther in time, but may further illuminate the interconnections between these musicians. Video #4 features Swell, Dave Burrell, and bassist Michael Formanek, playing a gig under Burrell's leadership in October 2011 at Le Poisson Rouge in NYC.

Lastly, you can see Swell, Moondoc, Parker and drummer Hamid Drake, billed collectively as Fire Into Music, performing (in two parts) a full set at the 2005 Guelph Jazz Festival in Guelph, Ontario, Canada.

For more about Steve Swell, check out his two extended interviews published by AllAboutJazz.com earlier this year and back in 2014.