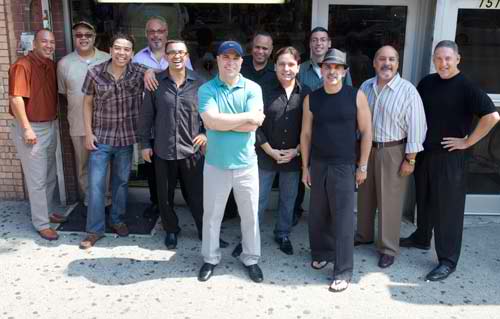 slideshow
This week, StLJN's video spotlight shines on the Spanish Harlem Orchestra, an NYC-based ensemble that will bring their show “Salsa Navidad" to St. Louis next Friday, December 8 at the Sheldon Concert Hall.

Bandleader Oscar Hernández is well known in New York City Latin music circles, with a long list of credits including performing with salsa greats such as Tito Puente and Celia Cruz during the 1970s, serving as pianist and arranger for singer Rubén Blades in the 1980s, and being the musical director for Paul Simon's Broadway show “The Capeman."

The Spanish Harlem Orchestra began in the year 2000 when Hernández was approached by producer Aaron Levinson about assembling and recording a Latin jazz orchestra. The band's debut CD Un Gran Dia en el Barrio, was released in 2002, getting a Grammy nomination for Best Salsa Album and a Latin Billboard Award for Salsa Album of the Year.

Since then, they've taken the New York salsa sound on tour around the world and released four more albums, the latest being 2014's eponymous Spanish Harlem Orchestra on the ArtistShare label, with guest appearances from pianist Chick Corea and saxophonist Joe Lovano.

For an idea of what to expect next week at The Sheldon, you can see and hear a full set by the SOH in the first embedded video up above, recorded on July 30, 2016 at the Tempo Latino festival in Vic-Fezensac, France.

After the jump, there's another video with excerpts from the “Salsa Navidad" show as performed in 2016 at the Dorothy Chandler Pavillion in Los Angeles. That's followed by clips of the tunes “Como Baila Mi Mulata," recorded in 2015 in Pittsburgh, and “Ariñañara" from the same year, location unlabeled.

The fifth clip is an episode of Salsa En La Calle, which is billed as “New York's Premiere Salsa Cable Television Show," from 2015 that features performances from the SOH and some conversation with Hernández.

The final video is another full set, documenting the Orchestra's performance at the 2011 Jazz in Marciac festival in France.

For more about the Spanish Harlem Orchestra, check Hernández's 2014 interview with Pollstar, and his 2013 interview with the website Latino Music Cafe.