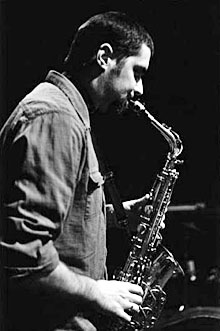 slideshow
This week, let's take a look at some videos featuring the musicians in Kuzu, an improvising trio who will be coming to St. Louis to perform in a concert presented by New Music Circle on Wednesday, March 11 at Joe's Cafe.

Saxophonist Dave Rempis, guitarist Tashi Dorji and drummer Tyler Damon all are veterans of the improvised music scene, with Rempis and Damon based in Chicago and Dorji living in Asheville, NC. They formed Kuzu in the fall of 2017, following a Rempis solo tour earlier in the year that included collaborations with both Dorji and Damon individually. The guitarist and drummer already had been working together for several years as a duo, so adding Rempis into the mix to make it a trio seemed like a “logical next step."

Kuzu put out their debut recording Hiljaisuus (which means “silence” in Finnish) in 2018, supporting the release with live dates in the late summer and fall, and since have continued to perform together when their individual schedules permit.

Improvised music performances are inherently difficult to “preview," but it is possible to get some idea of what to expect by listening to the sorts of things the individuals involved have done previously. Toward that end, today's set of videos includes both a complete show by Kuzu in trio form, as well as some duo performances and one solo from its three members.

What would seem to be the best available video document of one of their shows available online, the first video up above is a recording of the first set of a performance from October 2018 at the If Art Gallery in Columbia, South Carolina. After the jump, you can see the second set from the same show.

Next are two excerpts from duo shows by Damon and Dorji, the first recorded in November 2016 at Grunwald Gallery on the campus of Indiana University, and the second from September 2017 at the Cropped Out festival in Louisville, KY.

After that, there's an excerpt from a show by Rempis and Damon in April 2017 at Spot Tavern in Lafayette, IN, and finally, part of a Rempis solo set in October 2019 at Curiosity Coffee Bar in Columbia, SC.