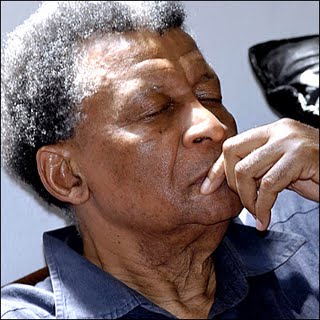 slideshow
This week, let's check out some videos featuring pianist Abdullah Ibrahim, who will be appearing with his band Ekaya in a concert next Saturday, April 14 at the Sheldon Concert Hall.

Born in 1934 in Cape Town, South Africa, Ibrahim grew up under his country's apartheid system of segregation, which was in place from 1948 to 1993. After briefly studying music at the University of Cape Town, in 1959 he formed the Jazz Epistles, a septet that featured the young Hugh Masekela on trumpet and recorded the first-ever jazz album by black South African musicians. Although the group was relatively short-lived, the influence of their music- a variant on the hard bop of Art Blakey's Jazz Messengers, garnished with a bit of local flavor- was significant in their home country.

Moving to Europe in 1962, Ibrahim would be mentored by Duke Ellington, who helped him sign his first record deal in the USA with Reprise Records, and would go on to a major career as a pianist, composer and bandleader, touring the world and recording more than 70 albums over the next six decades.

Now 84, Ibrahim for the last couple of years has been revisiting his early years with a touring show paying tribute to the music of the Jazz Epistles. While Hugh Masekela originally was intended to be part of the proceedings, his failing health and eventual death in January of this year have led to Ibrahim employing several substitute trumpeters in his place, including Wadada Leo Smith, Terence Blanchard, and Freddie Hendrix, who will perform with Ibrahim in St. Louis.

You can see one of the Jazz Epistles tribute shows featuring Blanchard in its entirety, recorded at last summer's Jazzaldia festival in Spain, in the first video embed up above.

After the jump, there's a collection of various other clips featuring Ibrahim. The first two videos, both from the 2011 Jazzaldia festival, featuring the pianist and Ekaya performing “Water from an Ancient World" and “John."

Next is a video of another full show, featuring Ibrahim leading a trio in December 2016 at the Library of Congress, where he was a designated “Jazz Scholar" that year.

That's followed by two solo piano performances, “Triste- My Love" and “Blues For A Hip King," both recorded in June 2016 in the studios of KNKX Public Radio in Tacoma, WA.

Last but not least, as a lagniappe you can see some of the earliest existing footage featuring Ibrahim. The video of the song “Jabolani" ("Joy") was recorded in 1968 for German television, and features the pianist with saxophonists John Tchicai and Gato Barbieri, bassist Barre Phillips, and drummer Makaya Ntshoko.