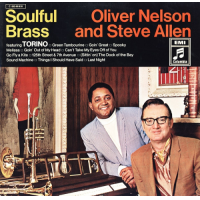 slideshow
Let's downshift slightly today during this week of little-known jazz albums with big-name arrangers conducting supersized orchestras. On Monday, I told you about Jimmy Smith's Portuguese Eyes (with Thad Jones) and yesterday I showcased Billy Taylor's Right Here, Right Now! (with Oliver Nelson). Today, let's look at two albums that Oliver Nelson recorded with TV host, composer and pianist Steve Allen. Admittedly, these albums are breezier by comparison and lean into the pop realm. But they were still arranged by Nelson conducting superb bands. They are fascinating for the songs chosen—pop-rock hits and Allen originals—and for Nelson's treatments.

Their first album, Soulful Brass, was recorded in Los Angeles for Impulse and produced by Bob Thiele. During this period, Thiele was in a bit of a jam. John Coltrane, the label's leonine visionary, had died in July 1967. To generate revenue in '68, Thiele was recording two types of albums—African-American free jazz by artists such as Albert Ayler and Archie Shep, and jazz-pop recordings by artists such as Nelson, Gabor Szabo and Tom Scott.

Soulful Brass was a brilliant concept, an extension of what Creed Taylor was already doing on his CTI imprint at A&M in 1967 and '68. Thiele brought together Nelson, a hard-core dramatic TV and film jazz composer-arranger, and Allen, a highly talented composer and competent jazz-pop pianist. The goal was to strike a chord with young adults eager for hip instrumental interpretations of radio hits. Allen's originals for the album are actually among the smartest tracks: Sound Machine (co-written with “Stanley Clayton," a pseudonym for Thiele), Things I Should Have Said (co-written with his son, David), Go Fly a Kite, Melissa and Last Night (Was a Bad Night). Oliver Nelson wrote the cinematic soul-jazz piece, 125th Street and 7th Avenue. The pop-rockers are Goin' Out of My Head/Can't Take My Eyes Off of You, Sitting on the Dock of the Bay, Spooky, Green Tambourine. Stan Applebaum wrote Goin' Great.

Allen plays piano and a RMK Rock-si-chord, which as you can tell from its name was an electric harpsichord that gave the keyboard a paisley sound. All of Nelson's arrangements are strong and never compromise. Again, you have to listen to this album in its time—1968, the height of psychedelic pop-rock and pop-soul fusion. What makes the music special is how Nelson stretches and casts the material in a jazz light. This may be pop but its far from “beautiful music" in the easy listening category. I was rather surprised at how good it was. The only drag is that the orchestra's members aren't listed.

Soulful Brass must have done reasonable well, since the second album Nelson and Allen recorded in February 1969 was Soulful Brass #2. The album was for Flying Dutchman, a label Thiele started in late 1968 after leaving Impulse. The album's music is spotty but includes Lo Mucho Que Te Quiero (The More I Love You), Where Did the People Go?, What a Wonderful World, California Soul, Son of a Preacher Man, Soulful Strut, Games People Play, Everyday People, Tell Me Something, New Dance and This Guy's in Love With You. Songs work or they don't.

Further proof that whatever Nelson touched turned to gold.

And here's the entire Soulful Brass #2. Be sure to dig California Soul, Soulful Strut and This Guy's in Love With You...