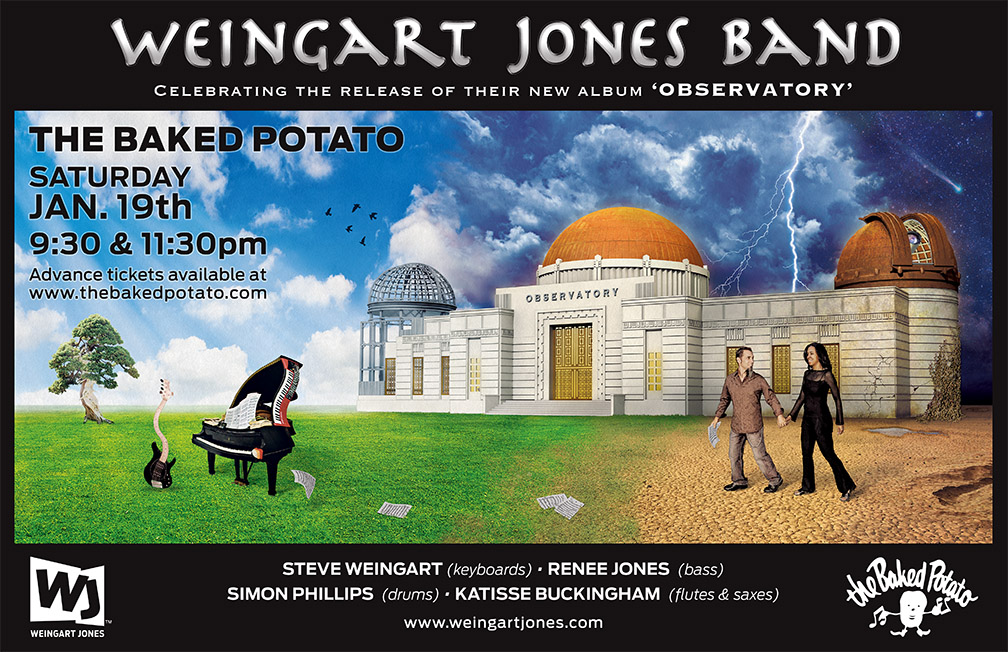 slideshow
That Steve Weingart and Renee Jones would have NASA-oriented imagery on the cover of their new album, Observatory, is not a random decision, and nor is the Salvador Dali-inspired surrealism on the back. Weingart and Jones transcend the boundaries of jazz even further, producing an album that echoes the futurist pulse of ‘70s progressive rock and the synthetic layers of fusion. It’s a quirky yet accessible work, following the duo’s formula of knitting together infectious hooks with high-I.Q. experimentation.

The shuffling, punchy drums of Simon Phillips and the vibrant sax of Katisse Buckingham on the first track, “Twenty Twelve,” suggest a hot jazz jam; however, Weingart’s spacey keyboards look to early ‘70s Pink Floyd for inspiration. It’s a spectacular way of opening a record, one that rockets past the atmosphere. By the time Weingart begins reaching Buckingham’s fiery energy, the song really blasts off. Like their previous effort, Dialogue, Weingart and Jones are keenly focused on creating knife-sharp melodies. Jones’ rhythmic bass lines give the songs an irresistible groove, allowing Weingart to cut loose with changes in tempo and mood. “Conspiracy” twists and turns like the rubbery instruments on the back cover art. However, the CD has its laidback moments, too. “Nostalgia” is aglow with summer romanticism, featuring some of Weingart’s most elegant playing and lush saxophones.