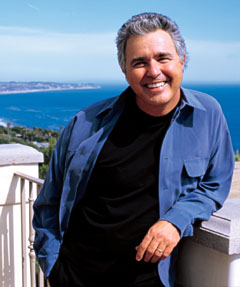 Los Angeles, CA. Often cited as the world's true “romance crooner" and proponent of all things love, legendary jazz balladeer Steve Tyrell will release his new collection, I'll Take Romance on February 7th, 2012. His Concord Records debut, I'll Take Romance, features 12 tracks with Tyrell, backed by his band along with a String Orchestra. The release of I'll Take Romance will be accompanied by tour dates across the country, including his annual seven week run at New York City's legendary Café Carlyle, where he replaced Manhattan icon Bobby Short seven years ago.

Inspired by Chelsea Clinton's choice of his version of “The Way You Look Tonight" for the first dance at her wedding (as told to Tyrell at last year's Café Carlyle engagement by proud Papa Bill Clinton), Tyrell then decided that his next studio recording should be an album consisting purely of romantic standards&#151an homage to The Great American Songbook with tracks culled from several genres expressing the theme of romance.

Featuring such gems as “That's All," “Taking a Chance On Love," “All of You" and the title track, Tyrell also covers a host of R&B classics, including the Etta James hits “At Last" and “Trust In Me;" Sam Cooke's “(I Love You) For Sentimental Reasons;" and Little Willie John's “Talk to Me."

In addition, Tyrell included a couple of songs that much of his audience would be discovering for the first time. During the 1960s, when he was a player in pop's celebrated “Brill Building Sound," Tyrell became close friends, and subsequently partners, with the hit songwriting team of Barry Mann and Cynthia Weil. From the vast Mann-Weil catalog, he has selected the relatively obscure gem “You Turn Me Around." Written in the early 1970s (and originally recorded by Bill Medley of The Righteous Brothers), says Tyrell, “It's a real find! It's a song I've known for a long time, and always wanted to do." Also included by Mann and Weil is “Don't Know Much," a Grammy winning song that he produced with Linda Ronstadt and Aaron Neville. Of newer vintage is David Foster and Linda Thompson's “A Love That Will Last."

A passionate song selection that is indeed perfect for Valentine's Day and beyond, Steve Tyrell's I'll Take Romance is a modern-day take on all things love.