Steve Turre Embracing His Latin Side at Smoke NY 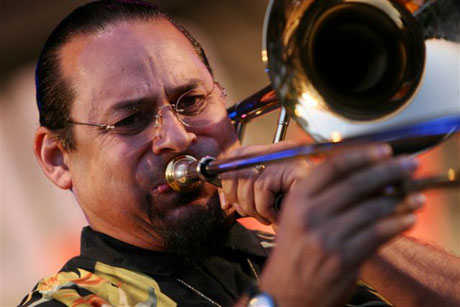 slideshow
The trombonist Steve Turre has an unforced affinity for Latin jazz and the sort of deep instinct that manifests over time.

Born into a Mexican-American family, he grew up in the San Francisco area, absorbing a wide range of sounds, including Latin music. That background has turned out to be vital in a career that has included stints with the salsa band Conjunto Libre and with the great percussionist-bandleaders Mongo Santamara and Tito Puente.

But Mr. Turre, who turned 60 this year, has usually declined to present his music as Latin jazz per se: he sees the style as part of a constellation of interests, alongside funk and jazz and R&B. (It makes perfect sense that he has worked in the Saturday Night Live band for more than 20 years.) His most recent album, Rainbow People (HighNote), characteristically reflects this ideal. His current band, the Latin Jazz All-Stars, diverges from it slightly, judging by its output at Smoke on Thursday night.

Of course this difference is chiefly by design. As its name suggests, the group focuses on Afro-Caribbean rhythm and features some considerable talent: the trumpeter Ray Vega, the pianist Arturo OFarrill, the bassist Yunior Terry and the percussionists Pedro Martinez (on congas) and Ernesto Simpson (on drums). Their rapport in the first set was clear, if a little casual. Mr. Turre presided over the action with the most genial brand of direction.