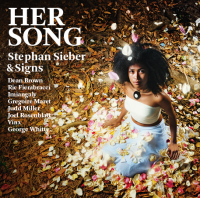 slideshow
Swiss Musician/Composer Stephan Sieber has released his new album that features some unique musicians in a wonderful sonic setting.

Signs was founded by Swiss drummer/composer Stephan Sieber in 1986. His intention was to create a laboratory where he could develop his musical language.

The original cast were the American tenor- saxophonist Dave Peterson, German pianist Frieder Lang on keyboards, Daniel Fricker on bass and Sieber on drums. Quickly the band had a certain renommee for their original material and their innovative approach to the jazz repertoire.

When the club business started to slow down in the nineties, Stephan Sieber worked mainly as stage musician and composer for stage music. But he re-vitalized Signs from time to time as a vehicle for his musical journeys. In 1994 he recorded Signs & Songs with David Klein, Nikki Reiser, Olivier Truan and Benoit Gabain. The CD was distributed by Quantaphon and Pool Media & Music.

Through the years the music changed as the musicians did. From 2003 to 2010 Sieber lead the house-band at the Culturium Jazz- & Socialclub, a legendary venue in Basle closed in 2010. After all these years as a sidemen playing the band book, he felt that it was time working on his original music again. But the music he had in mind needed some extraordinary players and it took some time to get their schedules coordinated. Finally the recordings started in 2013 with all these great musicians on board.

Guitarist Dean Brown has been an integral part of the global fusion and contemporary jazz scene for thirty years. He has recorded and/or toured around the world with his own projects and legendary artists such as: Marcus Miller, The Brecker Brothers, Billy Cobham, David Sanborn, Bob James, George Duke, Roberta Flack, Joe Zawinul, Lenny White, Kirk Whalum, and Steve Smith’s Vital Information.

Imiangaly is a young singer from Madagascar. Her style reflects her search for a universal expression rooted in a very original, ancient culture.

Judd Miller is THE top EVI player in the world. He has performed on numerous big budget movie soundtracks and with the world's top recording artists. Judd Miller is a renowned, leading exponent of the EVI (electronic valve instrument). His expertise on the instrument and his superlative sound design from his enormous, self-created sound design library has him as first call, and one of the most popular musicians, for top run movie scores. He can be found around the world working on movies and recordings with top composers and orchestras; London with the London Philharmonic, New York, Berlin, and of course his native Los Angeles. His work with composers Maurice Jarre, Stewart Copeland, Joel McNeely, Danny Elfman, James Newton Howard, John Williams, James Horner, etc., can be heard on countless, well-known movie soundtracks. Most recently, Judd was the Sound Designer and principal musician for composer Joel McNeely on James Cameron's acclaimed sci-fi hit “Dark Angel", and was a featured soloist on the Danny Elfman “Planet of the Apes" soundtrack and McNeely's “Peter Pan" movie! With McNeely he was completing the ambient sound design for James Cameron's IMAX documentary on the Titanic: Ghosts of the Abyss. His programming and sound design skills are also well known in the jazz world including ongoing collaborations with such artists as the Yellowjackets, Michael Brecker, Peter Erskine, Vince Mendoza, Charlie Haden.

Vocalist Vinx has performed and toured with such notable artists as Ernie Watts, Sting (Soul Cages tour and recording), Stevie Wonder (Conversation Peace and Vinx's own The Storyteller), Cassandra Wilson (Grammy winning Blue Light Til Dawn), Herbie Hancock, Sheryl Crow and Branford Marsalis (guests on Vinx's Rooms In My Fatha's House), Will Downing (writing and performing credits for Sensual Journey), Rickie Lee Jones, Tom Jones, Darius Rucker and Taj Mahal. Known to music fans as a percussionist and vocalist (One Man, One Voice, One Drum) his music is classified by some as jazz, by some as world music and by others as soul.

Grammy-award winning keyboardist Stephan Sieber started his career as a drummer/ percussionist both in Europe and in the U.S. Also a studied composer and arranger his credits include film- scoring, chamber music and orchestral works. He received several awards among others from the Swiss Composer’s Guild, from the European Forum for Culture and from the Clavel Foundation. He performed with Nikki Reiser, Walter Booker, Rhonda Dorsey, Thomas Moeckel, ATN Stadwjik, Coco Zhao, David Klein, Carlo Schöb, Peter Eigenmann and many more.