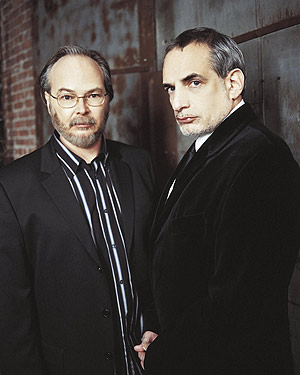 slideshow
Last night Donald Fagan and Walter Becker got dressed, walked down the street and made a little lucre playing the most cynical music ever.

The event was the final night of Steely Dans long stand at New Yorks Beacon Theatre. Theyve been here since July playing the final three records of their early career 1976s Royal Scam, 1977s Aja, and Gaucho, an album so stinky with 70s jaundice it came out in 1980, the most 70s year of all time.

Bands usually do these whole-album shows to remind us of their purest moment of Promethean genius. Not so much this time; in the liner notes to the Gaucho reissue Fagan and Becker wrote, It can truly be said that never before or since in the sorry annals of pop music has so much been expended by so few for so long in the service of so little or something like that.

Steely Dan fans make Eagles fans look like Sleater-Kinney, but even people who like Gaucho kind of have to admit that its pretty slick and callous stuff, an L.A. smooth-rock opus about decadence eating itself at the oceans edge. It was so hard to make the band split up for two decades after they finished it and strangely, or maybe fittingly, its also the source of their biggest hit, lechs lament Hey Nineteen.

That, of course, is part of its appeal to certain of its partisans. If you ever showed up late to your divorce hearing because you were fighting off a wicked cokeover after a night out with your receptionist, you are a Gaucho Man. One got the sense surveying the Beacon crowd that no small portion of the nights tickets had been purchased with TARP money.

How would Becker and Fagan take on a record they loving call (somewhat) problematic ? Happily, the show was a nice mix of sweetness and spite. Sitting at his Fender Rhodes piano, in shades and frumpy burgundy denim shirt, Fagan looked like the piano man at an off-track betting joint. At other points, he wandered the stage like a sour nomad, blowing away on a melodica. Becker stood to his left, stone faced and dressed in black, trading stolidly breezin leads with 70s session hand Larry Carlton, who played on the original record.

I expected that after weeks of shows, theyd have their crack band whipped into is-it-real-or-is-it-Memorex precision, but these legendary studio fascists allowed their hired guns far more personal space than they ever wouldve on record. The shadow boogie opener Babylon Sisters was pretty note-for-note, but things opened up from there. The disc went by faster and seemed shorter than it ever did during my many years of trying to make myself kind of like it.

Songs breathed a little and sprung to mid-life. The horns were a little more New Orleans; the disco shuffle on Glamour Profession was a little looser; songs from the second side of the record that usually blend into the mahogany (the title track and Third World Man) wretched a little more feeling from their resigned lilt; Time Out of Mind kinda seemed like a lost sunny radio hit. And this particular Steely Dan show offered the strange fun of watching choreographed female R&B back-up singers cooing cryptic stuff like, Bodacious cowboys / Such as your friend / Will never be welcome here / High in the custerdome.