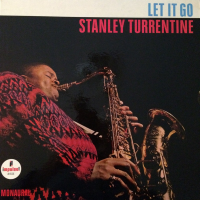 slideshow
Yesterday, around 3 p.m., I felt like listening to Stanley Turrentine. I wanted something upbeat and sassy by the tenor saxophonist framed by Shirley Scott's finger-popping organ. I also wanted the groove to be mid-'60s swinging—churchy and soulful, not riffy or electric. A few great standards and a bunch of blues. Most of all, I wanted Turrentine and Scott to square off on solos, showing each other what they got.

So I put on Turrentine's Let It Go, one of my favorite Turrentine albums. Recorded for Impulse in April 1966, the album included bassist Ron Carter and drummer Mack Simpkins. Turrentine and Scott were married at the time and it shows. The pair seem to be carrying on a musical kitchen-table conversation on each tune. The tracks are Turrentine's Let It Go, Burton Lane and Alan Jay Lerner's On a Clear Day (You Can See Forever), Turrentine's Ciao Ciao, Sy Oliver and Trummy Young's T'ain't What You Do (It's the Way That You Do It), Turrentine's Good Lookin' Out, Alan Bergman and Johnny Mandel's Sure As You're Born and Peter DeRose and Mitchell Parish's Deep Purple.

Turrentine was taught to play the saxophone by his father, his biggest influence. A self described “old young man," Stanley Turrentine was brought up on the Black bands and their star saxophone soloists of the 1930s. Turrentine's bossy style comes from hearing and seeing commanding saxophonists such as Don Byas, Illinois Jacquet, Ben Webster, Lester Young and Coleman Hawkins.

Born in Pittsburgh, Turrentine grew up in a musical family. His father, Thomas Turrentine Sr., was a saxophonist with Al Cooper's Savoy Sultans, his mother played stride piano, and his older brother, Tommy Turrentine, became a trumpet player. Stanley began playing professionally in R&B bands in the late 1940s and '50s. His musical training came during his time in the military mid-decade. Then he joined Max Roach's band and made the switch to jazz.

Shirley Scott was born in Philadelphia and studied trumpet and piano before switching to organ and recording late in the 1950s with Eddie “Lockjaw" Davis. She married Turrentine in 1960, but the pair divorced in 1971. During their marriage. they recorded on each other's albums, creating a singular sound as Turrentine's smooth R&B saxophone interacted with Scott's “told you so" organ. As this album proves, a gorgeous musical union. [Photo above of Shirley Scott by Chuck Stewart for Impulse]