Stanley Clarke Strikes up the Band with New CD Set to be Released June 15, 2010 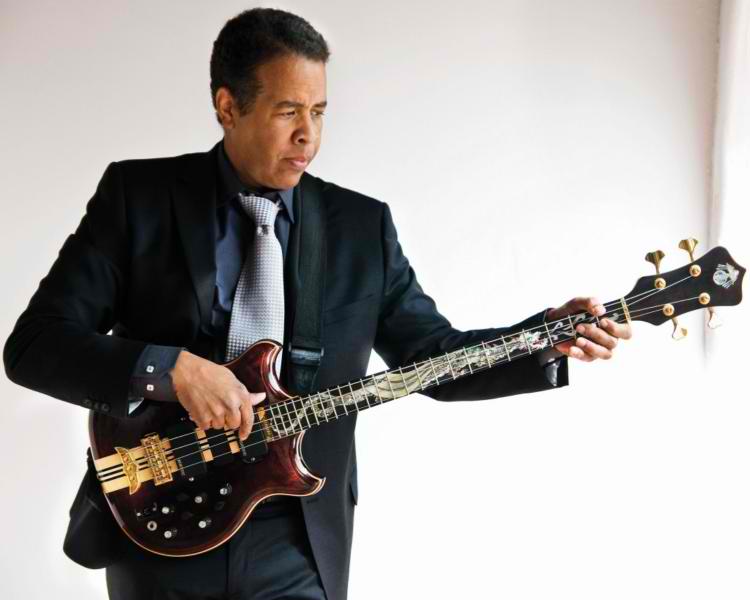 slideshow
Renowned bassist Stanley Clarke's new recording, The Stanley Clarke Band, is scheduled for release on June 15, 2010, on the Heads Up International, a division of Concord Music Group, and the Roxboro Entertainment Group label. The album is produced by Clarke and Lenny White. Unlike his previous acoustic bass release, Clarke feels that this album's music is new and different from just about anything he's done before. The range of collaborative material here has allowed him to venture to new levels of experimentation utilizing his arsenal of bass instruments. If forced, he compares this new CD to the first three albums of his solo career on Nemperor Records, Journey to Love, Stanley Clarke and School Days, with long extended electric pieces - a kind of journey.

“Technically, it's a Stanley Clarke record, but it's very much a band-oriented record at the same time," says Clarke. “I may be the leader, but everyone played an important role in what emerged. If a project like this can be looked at like a ship, I'd be the one steering the ship and keeping everybody on course. But all hands were definitely on deck, and everyone played an important role in getting us to our destination."

Also new for Clarke, the album is made up of compositions from members of the band. He is joined by Stanley Clarke Band keyboardist Ruslan Sirota and drummer Ronald Bruner, Jr. - who have been performing and recording with him for the better part of five years. Innovative young musicians, they have virtually grown up in Clarke's band and bring a freshness he admires. Following 2009's Jazz In the Garden, this is featured artist Hiromi Uehara's second Clarke recording collaboration. Clarke's rugged and complex bass work serves as the ideal foil for her trademark fiery and expressive piano chops.

“There are people on The Stanley Clarke Band other than myself who have something to say," explains Clarke. “Everyone on this project brought their own music and their own ideas. The styles of the individual tunes may be different, but the continuous thread that runs through the whole record is the fact that we're all operating as a unit on each track."

Featured artist, pianist Hiromi, is a huge star in Japan and quickly making her name here in the states as a performer and recording artist. Generally regarded as a solo artist, she shifts effortlessly into a band setting, says Clarke. “She doesn't need to be on the stage with anybody else, because she's a phenomenon on the piano," he says. “But, she likes collaborating with other musicians. She can play faster than anybody, but she can really listen, and she's right there with you." Hiromi composed and performs “Labyrinth" on the album. She performs on several other tracks as well.

Acoustic pianist/composer/arranger Ruslan Sirota, a child prodigy now twenty-seven, has already traveled the world, playing with some of the biggest names in classical and pop music. Born in the Ukraine, he was exposed early in his youth to American Jazz and improvisation, and now shows an intelligence and understanding of the genre way beyond his years. “Ruslan is becoming a recognizable force in the music world," Clarke notes. “He is one of the few musicians I'm aware of that knows a thousand songs. He has a unique understanding of the Jazz language." On this album Ruslan brings an unparalleled contribution in piano performances, not only on keyboard but with his profound melodic techniques on the acoustic piano. On The Stanley Clarke Band he wrote “Soldiers" and performs on almost all tracks. Ruslan has a solo album coming out later this year that has him playing duets with renowned pianists Chick Corea and George Duke. It will be released by Roxboro Entertainment Group.

Ronald Bruner, Jr., also a twenty-seven year old child prodigy, is a second-generation drummer extraordinaire. His earliest influence was his father, Ronald Bruner, Sr., a world class drummer who has performed and recorded with Diana Ross, the Temptations and Gladys Knight. Clarke feels that Bruner is probably one of the most important young drummers on the scene today and compares his innovation, technique and skill to that of the legendary drummer Tony Williams. Although a dynamic fixture in Clarke's touring band, Bruner has also performed with George Duke, Lee Ritenour, Suicidal Tendencies, Wayne Shorter and many more. Clarke observes, “drummers young and old look in Ronald's direction and they are all taking noticed of this young power house." Bruner co-wrote and arranged with Clarke “How's the Weather Up There" for The Stanley Clarke Band. He is also finishing up his first solo album.

Perhaps the most appealing aspect of The Stanley Clarke Band is the exceptionally organic nature of its genesis - the sense of grassroots creativity that existed outside of any efforts to tailor the music to any specific segment of the market.

This year The Stanley Clarke Band and Hiromi will be touring together domestically and internationally.

Clarke concludes, “This is the last electric album I'm going to do for awhile. The legacy of this release is that I'm providing lots of material and homework for a new generation of bassists to catch up with. I've worked hard to give the bass a distinctive voice. Now with bass conventions, all types of bass accessories as well as hundreds of bass magazines and blogs, I feel so excited about where it's going."

“Soldier" (Track 1) is the driving and intense opener written and arranged by Ruslan, who frames his concerns about global conflict in a musical context. “There are 27 recognized armed conflicts going on in the world right now," Ruslan explains. “A soldier's path is never easy. Perhaps today more than ever, on the battlefield of life we are all soldiers, fighting for a better tomorrow, fighting for our humanity, fighting for hope."

Africa inspired “Fulani" (Track 2) is written by international superstar bassist/composer/singer Arman Sabal-Lecco, a native of Cameroon. The Fulani tribe are noble sub-Saharan nomadic shepherds known for centuries of integrity, strength and honor. This piece allows Stanley to explore his sub-Saharan ancestry, his jazz tradition and contemporary approach to music in a unique way.

“Here's Why Tears Dry" (Track 3) written by Clarke, takes a much more melancholy turn with its combination of clever bass/piano conversations and aching electric guitar lines. “The tune came about when a family member was ending a long-time love affair," says Clarke. “There were a lot of tears, so I came up with that song. The tears evaporate into thin air, and the pain eventually goes away."

Funk uncut “I Wanna Play For You Too" (Track 4) is written by artist/composer/producer Felton Pilate of Confunkshun fame. Raw funk accentuated by the strong rhythmic groove of Clarke's bass and Bruner's drums to the foreground, Pilate plays keyboards on this track.

As in previous recordings, Clarke unveils a couple more of the solo bass compositions he has dubbed Bass Folk Songs, beginning with the gently rhythmic “Bass Folk Song No. 10" (Track 5) and followed later by the more atmospheric “Bass Folk Song No. 6" (Track 11). “These aren't quick bass solos that I just fire off in the moment," says Clarke. “They're very specific compositions and each one is different. I started writing them when I was much younger. You could play these on another instrument, but they really only sound good on the bass."

“No Mystery" (Track 6) written by Chick Corea won a Performance Grammy Award for Return To Forever. Clarke considers it an almost perfect composition, but one very difficult to play. “I love to play it just for the challenge of playing it," says Clarke.

Churning and unpredictable, “How Is the Weather Up There?" (Track 7), co-written and arranged by Clarke and Bruner, is a commentary on global warming, built around comments submitted by fans. “We left a message on Facebook inviting anybody who wanted to talk about global warming to call a phone number that we posted," says Clarke. “We got almost a thousand calls - left-wing stuff, right-wing stuff, guys who were so far out that you had no idea where they were coming from." The track was inspired by a song called “After the Cosmic Rain," which Clarke wrote in the early '70s for Return To Forever. Stanley's questions and concerns about global warming go back that far.

Possessed of one of the longest song titles in the annals of jazz, the multi-rhythmic and multi-layered “Larry Has Traveled 11 Miles and Waited a Lifetime for the Return of Vishnu's Report" (Track 8) is Clarke's homage to the heady days of jazz, rock, fusion in the 1970s. A long title with a purpose, which includes a handful of bands that dominated the era - Larry Coryell's 11th House, Miles Davis, Tony William's Lifetime, Return To Forever, the Mahavishnu Orchestra and Weather Report. “The record companies didn't even know what the hell we were doing back then," Clarke recalls, “but they were selling records, and people were coming out to see the shows. We were as loud as rock bands, but we brought all kinds of technique to it. It was like a grassroots movement. It was a great time."

Labyrinth (Track 9) is composed and performed with the band by featured artist pianist Hiromi. As the title evokes, the song is a maze of complex melodic paths leading to a center. Hiromi's characteristic high energy, emotional performance on acoustic piano here is a blend of musical genres -jazz, progressive rock, classical and fusion.

Uptempo and lighthearted, “Sonny Rollins" (Track 10) is just what the title suggests - a tribute to one of the last living masters of the post-bebop era, embellished by the vocal acrobatics of Cheryl Bentyne. “What's really cool about this piece is that I used Charlie Mingus' bass to record it," says Clarke. “It was given to me by Bill Cosby many years ago, and I haven't modified it in any way since Charlie used it. So the track has this really classic sound that I like a lot. The tones I could pull from this bass were extraordinary." Clarke considers Rollins one of the most significant musicians in his life. “One of the highlights of my life was recording with Sonny and an even greater highlight was playing live with him."