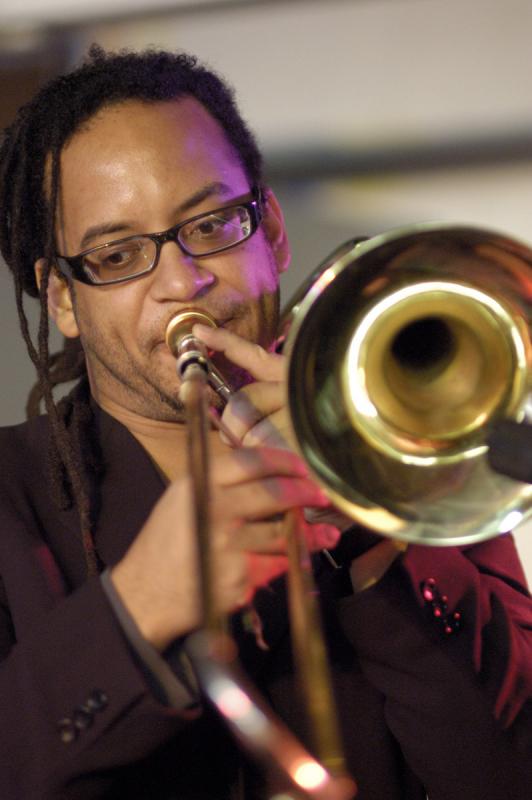 slideshow
Brooklyn-based trombonist, composer, and all-around musical mad-scientist Josh Roseman celebrates his Jamaican heritage with a musical tribute to the founding fathers of dub and ska, presented by Stanford Lively Arts on Saturday, November 12 at 8:00 p.m. in Campbell Recital Hall.

In the days leading up to the concert, on November 9 at 12:00 p.m., Loren Schoenberg of the National Jazz Museum in Harlem returns to campus for a free lunchtime presentation at the Cantor Arts Center.

Josh Roseman's appearance is supported by Fred and Stephanie Harman and the Koret Foundation's Koret Jazz Project. The Koret Jazz Project is a multi-year initiative to support, expand, and celebrate the role of jazz in the artistic and educational programming of Stanford Lively Arts.

Josh Roseman's projects present a blend of beats and surprise, thoughtful open spaces, compositional rigor, and outlandish improvisation. His core electric ensemble, the Josh Roseman Unit, has toured extensively throughout Europe and the United States over the past 10 years and is a thoroughly modern setting for a venerable instrument. His creative alliances include Dave Holland, Dave Douglas, Steve Coleman, Don Byron, Uri Caine, Meshell Ndegeocello, Oliver

Lake, John Zorn, the Skatalites, Charlie Hunter, Soulive, MMW, Peter Apfelbaum, the late Lester Bowie, and many others. He has appeared on well over 100 albums with artists ranging from Cibo Matto to the Roots to Brian McKnight to the SFJAZZ Collective. His solo albums include the groundbreaking funk epic Treats for the Nightwalker and, more recently, New Constellations, a live dub tribute to Jamaican trombone pioneer Don Drummond.

In 1996, Myron Walden's debut album, Hypnosis, was released to great critical acclaim. It was followed by Like a Flower Seeking the Sun in 1999, with both albums featuring original compositions and arrangements he recorded with NYC Records. In addition to his successful solo career, Walden has performed with several bands, two of which hold a particular place in his heart as well as in American music's history. As a founding member of the Brian Blade Fellowship Band (formed in 1997), he inspired many of Blade's compositions with his soulful solos on the alto saxophone and bass clarinet through the years.

Curtis Hasselbring is a trombonist, guitarist, and composer who resides in Brooklyn, New York. He leads the groups the New Mellow Edwards, Decoupage, and the Curha-chestra. He has spent the last 20 years performing and recording with such diverse artists as Medeski Martin and Wood, Slavic Soul Party, Golem, Bobby Previte, Josh Roseman, Andrew D'Angelo, Satoko Fujii, Frank London, Tom Harrell, and Anthony Coleman, among others. Hasselbring appears on over 60 recordings including two releases as a leader with the New Mellow Edwards.

Born in Berkeley, California, Peter Apfelbaum began performing professionally while in his early teens and was a member of the award-winning Berkeley High Jazz Ensemble under the direction of Phil Hardymon. In 1977—his senior year at Berkeley High—he formed the 17-piece Hieroglyphics Ensemble as a vehicle for composing and exploring nontraditional musical forms.

Barney McAll moved to New York permanently in 1995 to join the Gary Bartz Quartet. In addition to being a longtime collaborator with Josh Roseman, McAll has played for many years with trombonist Fred Wesley and has toured or recorded with luminaries such as Dewey Redman, Kurt Rosenwinkel, and Billy Harper. He has released five albums under his own name and has scored numerous political documentaries for PBS and the BBC.

Mark Guiliana's unique and uncompromised approach to playing the drums has earned him international acclaim as both a leader and a sideman. He has performed and/or recorded with a wide variety of artists including Meshell Ndegeocello, Wayne Krantz, bassist Avishai Cohen, Gretchen Parlato, Matisyahu, and many more. Beat Music, Guiliana's debut solo record (coproduced by Ndegeocello), is due out in 2012.

Tickets for the Josh Roseman Sextet, presented by Stanford Lively Arts on Saturday, November 12 at 8:00 p.m. in Campbell Recital Hall, Braun Music Center, are $24 for adults and $10 for Stanford students. Half-price tickets are available for young people age 18 and under, and discounts are available for groups and non-Stanford students. Call 650-725-ARTS (2787) or visit Lively Arts online at http://livelyarts.stanford.edu.

Campbell Recital Hall is located in the Braun Music Center of Stanford University campus at 541 Lasuen Mall, adjacent to Tresidder Union. Parking on campus is free of charge after 4:00 p.m. and on weekends at all times and may be found in the lot off Lagunita Drive near Tresidder Memorial Union and on Abbott Way. Maps and directions can be accessed at http://livelyarts.stanford.edu.

Stanford Lively Arts curates experiences that engage artists' and audiences' imagination, creativity, and sense of adventure. Founded in 1969 at Stanford University, we produce and present music, theater, dance, spoken word, and multi-media events. We place a special focus on innovation and risk-taking, and through commissions and premieres are an incubator and destination for new work. Stanford Lively Arts plays a leading and collaborative role in the university's thriving vision of a sustained culture of creativity—one in which the arts integrate with the academic disciplines, flourish as a vital part of campus and community life, and inspire new perspectives on our lives and culture.