Stan Getz: The Movies and TV 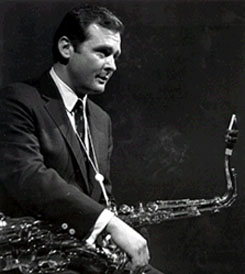 slideshow
By the mid-1950s, tenor saxophonist Stan Getz had become a sensation as a soloist and started to be featured in films. A few years later, Getz's horn could be heard in European films and then American films upon his return to the U.S. in 1960. From the 1960s until his death in 1991, Getz was heard regularly on TV shows such as Ironside and The Courtship of Eddie's Father as well as in movies.

Here are 13 clips of Getz on the air and on the screen:

Here's Steve Allen visiting a sound stage at Universal-International in 1955 to prep for his title role in The Benny Goodman Story. The clip features the Benny Goodman Trio (Goodman on clarinet, Teddy Wilson on piano and Gene Krupa on drums), Stan Getz, Buck Clayton and Urbie Green...

Here's Getz, with Gary Burton on vibes, in the film, Get Yourself a College Girl in 1964...

Here's Getz with Gilberto performing The Girl From Ipanema in the film The Hanged Man in 1964...

Here's Getz playing during the opening of the film Mickey One (1965)...

Here's Getz and Edie Adams in an ad for Muriel Cigars...

Here's Getz playing The Telephone Song, with Ruth Price on Shindig! in 1965...

Here's Getz playing on the soundtrack of the French film, Death of a Corrupt Man in 1977...

Here's another track from the movie...

Here's Getz playing in the trailer of the Italian film La Storia di Piera in 1983...

And here's Getz soloing behind Kim Bassinger in The Marrying Man in 1991...