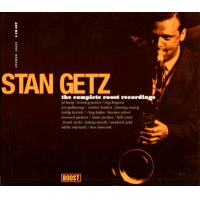 slideshow
On May 17, 1950, Stan Getz began recording for the Roost label as leader. On that date, Getz was backed by Al Haig (p), Tommy Potter (b) and Roy Haynes (d), and the quartet recorded six sides. Over the next two years, Getz recorded 59 tracks in all for the label, including quartet and quintet studio sessions, live quartet and quintet dates, material with guitarist Johnny Smith and three sides with Count Basie. They remain among his finest recordings.

Getz's first session as a leader was in 1946, when he headed up a group billed as the Be-Bop Boys for Savoy—Hank Jones (p), Curly Russell (b) and Max Roach (d). He also led bop sessions in 1948 and '49. In mid-1949, he recorded as a leader for Prestige, the so-called Long Island Sound session, which was followed by three more dates for the label in 1950.

Roost was founded in 1948 by Monte Kay, who promoted acts at the Royal Roost nightclub. The label was bought out in Sept. 1949 by Sammy Kaye, one of the owners of the Three Deuces, and Jack Hook, a record promoter for United Music. Teddy Reig also became a partner and head of A&R along the way.

The appeal of the Roost sessions stems from Getz's gifts as a sensitive swinger and balladeer. Like Lester Young, Getz played his tenor sax high on up on the instrument's register, which enchants the ear. Getz's tone was dry and bright, and he routinely left strategic gaps of space, allowing the ear to catch up before giving his horn the gas to race ahead of the heart. As for phrasing, Getz emulated the singing sound of many female pop vocalists in the late 1940s like Margaret Whiting, Peggy Lee and June Christy. [Stan Getz, above, with Lester Young]

Getz's melodic modernism is unrivaled at this point. Solos on songs like Potter's Luck, Split Kick, Parker 51, Hershey Bar and Tootsie Roll illustrate his drive and daredevil approach to improvisation. He had a delicate, commanding touch and a lyrical sensibility on the Roost material that has all the charm of a salesman selling you something you thought you didn't need. He's insistent but never pushy. [Stan Getz, above, in the early 1950s]

Ultimately, what we hear is the ambitious sound of Getz before stardom. That moment would come with his Roost recording of Moonlight in Vermont as part of the Johnny Smith Quintet in March 1952. The cool, jazz-pop rendition of the standard would send Smith's 10-inch album climb to No. 1 and turn Getz into a small-group leader and solo artist without rival.