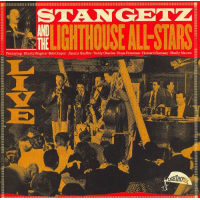 slideshow
In April 1953, Stan Getz was in New York recording for Norman Granz's Clef label. He was joined by Bob Brookmeyer on valve trombone, John Williams on piano, Bill Crow on bass and Al Levitt on drums. This group was a revamped version of the Stan Getz Quintet formed after guitarist Jimmy Raney left the group in December 1952. According to Donald Maggin's Stan Getz: A Life in Jazz (1996), Raney's departure was over Getz's escalating drug habit and the paranoia, anxiety and shady characters that came with it.

After the new quintet recorded for Clef, Getz left for California. According to interviews at the time, Getz was determined to create a pianoless sextet, enlisting Gerry Mulligan and Chet Baker and bringing them back to New York to join Brookmeyer.

When he arrived in California in May, Getz gigged at the Lighthouse in Hermosa Beach with the Lighthouse All-Stars, a revolving combo of jazz studio musicians. In the case of his May 31 appearance at the club, the band featured Stan Getz and Bob Cooper (ts), Jimmy Giuffre (bar), Teddy Charles (vib), Russ Freeman (p), Howard Rumsey (b) and Shelly Manne (d). Getz also performed fronting just the trio segment of this group. Eastcoaster Teddy Charles was in Los Angeles to produce records for Prestige at the time.

While gigging later that summer, Getz played at the Lighthouse with Shorty Rogers and Maynard Ferguson (tp), Milt Bernhart (tb), Jimmy Giuffre and Bob Cooper (ts), Frank Patchen (p), Howard Rumsey (b) and Shelly Manne (d). On some of these dates, Hampton Hawes played piano instead of Patchen.

The sound of Getz in the raw on the beachside club in 1953 is really something. The action for the ear is between Getz and pianist Russ Freeman, and then Getz and Patchen and Hawes. There was something synergistic about Getz and his pianists. As you listen to the recordings in question, it seems as if nothing else mattered to Getz except what his pianists were playing. All three were signature West Coast keyboardists with different punctuating styles. Freeman had a cool bop sensibility and beautiful chord voicings while Hawes had a harder bop attack and Patchen was a Bud Powell disciple. The competitive nature and ambition in the playing remains remarkable.

In July and August 1953, Getz and his quintet recorded in L.A. for a 10-inch Norgran album called Interpretations. But by Labor Day, the Stan Getz Quintet's bookings slowed considerably, and Getz left the group to go out on tour with Stan Kenton as the featured soloist. It's unclear why Getz abandoned his quest to form a pianoless sextet. More than likely, neither Mulligan nor Baker felt the need to give up the Hollywood weather and scene for Getz's East Coast vision.

A year later, Mulligan turned Getz's dream into a reality, forming a pianoless sextet with Broomeyer, Zoot Sims and trumpeter Jon Eardley with bassist Bill Crow and drummer Dave Bailey (all above).

JazzWax tracks: You'll find this music in this post on Stan Getz and the Lighthouse All-Stars here. The second CD features Getz at the Hermosa Beach club in 1955.