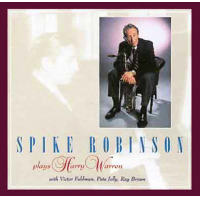 slideshow
It should be noted from the outset that there are no bad Spike Robinson recordings. The tenor saxophonist had a bold swinging style, much like Al Cohn, but Robinson tended to pop up into instrument's higher register and linger there longer, likely a result of his early years on alto saxophone and clarinet. In this regard, he shares much in common with Stan Getz, both in tone and the lyricism of his playing and solo work.

One of Robinson's finest albums (and there are many) is Spike Robinson Plays Harry Warren (Hep). Part of the album was recorded for Discovery Records in December 1981 and features Spike Robinson (ts), Victor Feldman (p) Ray Brown (b) and John Guerin (d). The balance was recorded in 1993 in Los Angeles with Pete Jolly (p), Jennifer Leitham (b) and Paul Kreibich (d). It's flawless.

Harry “Spike" Robinson was born in Kenosha, Wis., in 1930. He began playing the saxophone at age 12 and then the classical clarinet, starting his professional career at 14. After high school in 1948, he joined the Navy as a musician and was stationed in the U.K. in 1950, where he recorded his first few 10-inch LPs for Esquire Records starting in 1951. In the mid-1950s, Robinson was discharged and returned to the States, winding up in Chicago. Disenchanted with the jazz scene there, Robinson studied electrical engineering at the University of Colorado on the G.I. Bill.

For the next 30 years, he worked as an electrical engineer, playing in jazz bands at night, mostly in Boulder, Colo. Robinson had an unusual way of blowing into the saxophone's mouthpiece, with the instrument's neck turned and using the side of his mouth. In the mid-1980s, he retired from his engineering job and moved to England to play the saxophone and record.

The tracks from 1981 are: This Is Always, This Heart of Mine, The More I See You, Chattanooga Choo Choo, Cheerful Little Earful, I Only Have Eyes for You, Lulu's Back in Town and I Wish I Knew. The tracks from 1993 are At Last, The Boulevard of Broken Dreams, There Will Never Be Another You, I Had the Craziest Dream, Shadow Waltz and Serenade in Blue.

Here's a clip of Robinson that comes from a local TV profile of him...