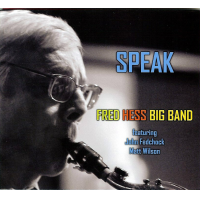 “Highly original! Jazz entertainment at its best! This is an excellent CD collection of what contemporary big band music is doing, and its incredibly imaginative —Lee Prosser, JazzReview.com

“All too often, we get so hung up on labels that we forget to listen to the music. With composer/arranger/tenor saxophonist Fred Hess, there's no reason to ask if his big-band sound is adventurous or accessible. The simple answer is that it is both — and it doesn't take very long listening to his new CD SPEAK to discover what sophisticated, big-band fun is all about.” —Norman Provizer, KUVO-FM and Downbeat

As a leader, tenor saxophonist/composer Fred Hess is best known for his smaller- ensemble CDs. But the Pennsylvania native, who grew in New Jersey and lives in Colorado, has long had an interest in the big-band sound going back to the 1950s. In fact, in the early 1990s, Hess, who holds a doctorate in music composition and teaches at Metro State University in Denver, CO, was the force behind the Creative Music Works Orchestra in the Mile High City.

SPEAK is Hess’s 16th CD. The core of Hess’ big band consists of members of the potent quartet he launched in 2003 that included Ron Miles on trumpet, and Matt Wilson on drums. The addition of trombonist John Fedchock as guest soloist and section leader gives a sparkling boost to the musical proceedings. Consisting of 6 original compositions and a single arrangement (“Speak To Me”), this CD continues Hess’ forward-looking stance, as evidenced in his previous successful big band entries, HOLD ON (Dazzle 202) and INTO THE OPEN (Alison 116).

As a composer, Hess has received considerable recognition over the years, receiving the Julius Hemphill Award from the Jazz Composers Alliance in 2000, as well as capturing the top prize at the 2006 International Jazz Composers Symposium. On the playing side, Hess, the founder of the Boulder Creative Music Ensemble, has worked and recorded with trumpeter Miles and with drummer Ginger Baker’s jazz group.

The success of this venture is clear as soon as the tenor sax duo states the bop-like theme of the opening track “Blues For Bonnie Belle.” On the four original tracks that follow, Hess’ moves into the big-band arena with new conceptions of how a contemporary big band should sound, adding new twists to even the most familiar paths. The listener has no question about his talent for writing intricate and intelligent music that still swings – and his fluency on the tenor saxophone. Speak to Me, a praise-ballad by guitarist Tommy Walker, receives an exensive harmonic makeover, featuring Hess’ saxophone in a solo beautifully framed by the surrounding orchestration. The extended and powerful tribute to saxophonist John Coltrane’s music, Psalm To Hymn, closes the disc. This is big-band music that captures the heart along with an original edge that captivates the listener’s mind.