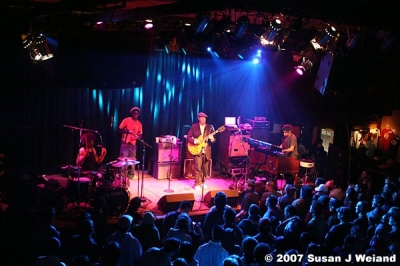 slideshow
TAKING IT FROM BROOKLYN TO ABBEY ROAD!

New York City's preeminent soul jazz trio, Soulive, bring the funk to The Beatles' iconic repertoire with the release of Rubber Soulive due September 14 on the band's own Royal Family Records. Featuring renditions of 11 classics by The Fab Four, including “Come Together," “I Want You (She's So Heavy)" and “Revolution," Rubber Soulive takes its place in a lineage of classic instrumental albums by the likes of Booker T. & The M.G.'s, George Benson and Count Basie that have paid tribute to The Beatles. Soulive will announce an extended U.S. Fall tour to support the release in the coming weeks.

“We've always been big Beatles' fans. They're consistently in heavy rotation in all of our lives. And then for Halloween last year we had a great show in D.C. by trying out an all-Beatles set. The material was so much fun to play that we decided it had to be put to wax," explains Soulive guitarist Eric Krasno. “At first we thought about doing all of Rubber Soul, but with so many amazing songs to choose from we expanded the scope and picked the ones that lent themselves to our sound, and where we could best add a Soulive flavor."

Recorded over four days at drummer Alan Evans' own Playonbrother Studios in upstate New York, Rubber Soul presents the band back in its original trio format. After a handful of albums experimenting with different vocalists and horn sections, it's apparent from the album's opening track, a greasy rendition of “Drive My Car," that a return to form was in order. For the next 40 minutes, Soulive add their inimitable stamp to one classic after the next from The Beatles' adored catalog. A stately bounce informs “In My Life" punctuated by a majestic organ break courtesy of Neal Evans. “Eleanor Rigby" finds Alan pushing insistent syncopation into the backbeat and Neal covering a full string section with his two hands. A gorgeous rendition of “Something" makes clear that while Krasno can get down with the best of them, he can also dig deep into the heart of a ballad as he rings every last drop of emotion from the classic George Harrison melody. The trio rounds out the set with a three-dimensional version of “While My Guitar Gently Weeps." The performance concisely encapsulates the definitive Soulive sound built upon the trio's shimmering, wah-drenched guitar licks, soaring Hammond organ lines and relentlessly propulsive swing.